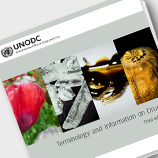 10 March 2016 - Ahead of next week's Commission on Narcotic Drugs and the April 2016  UNGASS on the World Drug Problem, UNODC have published its newly updated third edition of the manual 'Terminology and Information on Drugs'. This edition of the publication - the first revision since 2003 - offers a much needed and timely resource, given the evolution and changes in drug markets in recent years.

Highlighting the relevance of the publication and its release at such a key point in time, UNODC's Director for Policy Analysis and Public Affairs, Jean-Luc Lemahieu, noted: "This updated publication reflects the many changes in drug markets since the last revision and is a timely resource for both experts and non-experts. It is a key tool within this area and one which I am certain will be widely used by all working on issues related to the topic".

Intended for a wide audience and formatted as an accessible and user friendly resource, the publication covers basic concepts and information on substances under international control including definitions of scientific terms, common street names, commonly used forms, routes of administration, and desired or adverse effects.

59th Session of the Commission on Narcotic Drugs