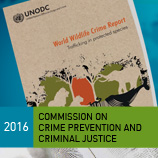 24 May 2016 - Today, UNODC launched its inaugural World Wildlife Crime Report, highlighting how the poaching and illegal trade of thousands of different species across the globe not only present real environmental dangers but ultimately undermine the rule of law by potentially fuelling conflict. The report - part of UNODC's ongoing Global Programme on Wildlife and Forest Crime - also urges shared responsibility in tackling this crime given how products made from illicit flora and fauna such as fashion items, furniture, food, and pets, may be hidden in plain sight.

Launched at this week's Commission on Crime Prevention and Criminal Justice (CCPCJ), the report was developed by UNODC with data provided by partner organizations under the International Consortium on Combating Wildlife Crime (ICCWC), including the Secretariat of the Convention on International Trade in Endangered Species of Wild Fauna and Flora (CITES) and the World Customs Organization (WCO).

One of the main messages the new report aims to convey is that wildlife and forest crime is not limited to certain countries or regions, but is a truly global phenomenon. The report looks at eight case studies of species products sorted by seven industrial sectors that make use of wild sourced materials across the world.

The trafficking of wildlife is increasingly recognized as both a specialized area of organized crime and a significant threat to many plant and animal species, and the World Wildlife Crime Report represents the first global assessment of its kind. The report builds on information taken from World WISE: a recently-unveiled data platform, which contains over 164,000 seizures related to wildlife crime from 120 countries. One of the key observations that the database illustrates is the extreme diversity of this illegal activity: nearly 7,000 species are included in the seizures, yet no single one represents more than six per cent of the total, nor does a single country constitute the source of more than 15 per cent of the seized shipments.

Launching the report, UNODC Executive Director, Yury Fedotov, elaborated on this point: "The desperate plight of iconic species at the hands of poachers has deservedly captured the world's attention, and none too soon. Animals like the tiger, feared and revered throughout human history, are now hanging on by a thread, their dwindling numbers spread across a range of states that are struggling to protect them. African elephants and rhinos are under constant pressure. But the threat of wildlife crime does not stop with these majestic animals. One of the critical messages to emerge from this research is that wildlife and forest crime is not limited to certain countries or regions. It is not a trade involving exotic goods from foreign lands being shipped to faraway markets".

CITES Secretary-General, John E. Scanlon, meanwhile noted how the launch of the first ever World Wildlife Crime Report highlighted that the response to wildlife crime has come of age. "This comprehensive global report is rooted in the best data and case studies available, is backed by in-depth analysis, and demonstrates a heightened sense of rigor in the way in which we report on wildlife crime. Future reports will benefit from more and better data, with CITES Parties to submit annual illegal trade reports starting in 2017. Hundreds of additional species of animals and plants, including 250 tree species, are being considered for global protection under CITES at its 17th meeting of the Conference of the Parties - to be held in Johannesburg later this year. The World Wildlife Crime Report shows the extensive involvement of transnational organized criminal groups in these highly destructive crimes and the pervasive impact of corruption, demonstrating that combating wildlife crime warrants even greater attention and resources at all levels. We sincerely thank the Executive Director and staff of UNODC for leading this tremendous effort, together with our other ICCWC partners, INTERPOL, the World Bank and the World Customs Organization"

The report also offers an analysis of legal and illegal markets of wildlife and forest products, which can be useful in addressing vulnerabilities in the legal trade and promote better global regulatory systems.

It additionally highlights how gaps in legislation, law enforcement and criminal justice systems present serious issues. "If we want to get serious about wildlife and forest crime, we must shore up our collective responses and close these gaps," warned Mr. Fedotov, noting that as with all forms of organized crime and trafficking, criminals will always look to exploit systems where they can.

In contrast to other research on the topic, UNODC's new report does not provide a dollar amount estimate for the annual value of illicit wildlife trade. While the markets for specific species products can be estimated with varying  degrees of precision, an accurate figure for the 7,000 species included in World WISE would be near impossible. Instead, the report looks to provide an insight into the crime and the great lengths to which traffickers go to exploit loopholes in the international controls. By doing so, several significant gaps in this area are highlighted, including informational, legislative and operational factors which, if addressed, could dramatically reduce the negative impact trafficking is having on wildlife.

UNODC's current campaign on the topic: 'Serious about Wildlife Crime'.