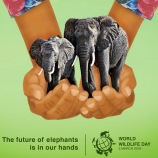 3 March 2016 - The third annual World Wildlife Day (WWD) is being commemorated globally today to raise awareness around the world's wild animals and plants under the theme 'The Future of Wildlife is in our Hands'. To commemorate the day, and in particular to raise awareness about the devastating impact of wildlife crime, UNODC, the World Bank, the World Customs Organization, INTERPOL and the Convention on International Trade in Endangered Species of Wild Fauna and Flora (CITES) - collectively making up the 'International Consortium on Combating Wildlife Crime' - have launched a powerful new Public Service Announcement. The PSA - which uses the hashtag #SeriousAboutWildlifeCrime - highlights the scale of organized crime and the effect it is having on wildlife by pushing species to the brink of extinction and destroying natural resources.

In his statement for World Wildlife Day, Secretary-General Ban Ki-moon stated that, "Time is running out to end the poaching crisis that threatens some of the world's most iconic species. To combat poaching and trafficking of protected species it is essential to address both the demand and supply of illegal wildlife products through agreed goals and targets and international instruments, such as the Convention on International Trade in Endangered Species of Wild Fauna and Flora (CITES)."

UNODC Executive Director Yury Fedotov meanwhile highlighted that to tackle wildlife and forest crime "an integrated approach is needed to reduce demand and interrupt supply through the seizure of shipments, assets and proceeds. Help must also be offered to local communities to provide alternative livelihoods, build local enterprises and to empower communities to live in harmony with their surroundings." He further urged to join hands through partnerships and cooperation in order to succeed against the criminals.

3 March is World Wildlife Day, reminding us that the future of wildlife is #InOurHands. Organized crime is impacting the world’s forests and animals. Criminal networks are generating massive illicit profits at the expense of these fauna and flora and harming the people who depend on them. Share this new video and help encourage people across the globe to get #SeriousAboutWildlifeCrime. Visit http://www.wildlifeday.org to find out more. #WWD2016

Posted by UNODC - United Nations Office on Drugs and Crime on Thursday, 25 February 2016

While World Wildlife Day is being celebrated today during a high level event at the UN Headquarters in New York, the UN also announced plans for a Global Coalition campaign to end the illegal trade in wildlife. A joint effort by the UN Environment Programme (UNEP), the UN Development Programme (UNDP), UNODC, CITES and other partners, the campaign will call on individuals, businesses, civil society and academia to help end the illicit trade in wildlife and for governments to meet and scale up their recent commitments.