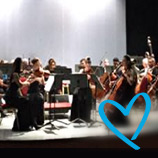 5 September 2016 - Panama joined the Blue Heart Campaign against Human Trafficking in 2014. In this regard, the country's Ministry of Public Security, UNODC's Regional Office for Central America and the Caribbean, the Turkish Embassy in Panama and representatives from the private sector organized in recent days a Blue Heart Gala Concert as a joint effort to highlight the importance of preventing and addressing this serious crime.

The Gala, which took place at the Concert Hall of the San Agustín School in Panama City, was attended by more than 600 people who enjoyed the music of the country's National Symphony Orchestra and the Nemeth Quartet from Turkey.

The event was opened by Alexis Bethancourt, Minister of Public Security of Panama, and Gillian Murray, UNODC's Deputy Director for Policy and Public Affairs, who spoke about the enormous impact of seemingly small actions taken by any individual in preventing and combatting this crime. They also encouraged the audience to contribute to the United Nations Trust Fund for Victims of Trafficking in Persons, managed by UNODC, and Panama's own Fund for victims of this crime.

UNDOC in Central America and the Caribbean