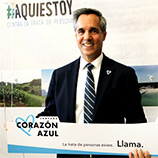 1 August 2017 - As part of the activities to commemorate the World Day against Trafficking in Persons, the Government of Mexico and UNODC launched the campaign Blue Heart Mexico: #AquiEstoy contra la trata de personas (#HereIAm against trafficking in persons, in English), on 31 July, in Mexico City.

In his speech at the launch event, John Brandolino, UNODC Director for Treaty Affairs, highlighted Mexico's leadership role in the prevention of human trafficking. #AquiEstoy sends a "strong call to action to all members of the society to do something concrete to end human trafficking", Mr. Brandolino said.

Also speaking at the launch of the campaign, Miguel Ángel Osorio Chong, Mexico's Minister of the Interior highlighted the commitment of the Mexican government to combat this terrible crime and reiterated the importance of protecting the human rights of human trafficking victims.

Felipe De La Torre, Officer in Charge of UNODC Mexico, presented the campaign, which shows images of possible places and situations of human trafficking and presents human trafficking victims as individuals with rights, in the need of protection and assistance.

Around 300 people attended the event, and they all made a personal commitment to promote the initiative and to say "#AquiEstoy contra la trata de personas".

The campaign's central graphic element is a balloon, which usually is a symbol of happiness, innocence and freedom. But when tied, it loses its capacity to fly and to move independently - just like human trafficking victims.

The Mexican civil society has contributed to the development of the #AquiEstoy campaign. Promotional materials which includes an introduction video, posters and postcards are available on the campaign's website.

The campaign, financed by the US Department of State, is accessible for people with disabilities. It uses the braille system in the printed materials and closed caption subtitles in the videos.