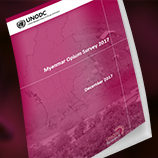 Reductions have been most significant in East Shan with a drop of 37% and South Shan with a drop of 29%. However, the report also reveals that while progress has been made, North Shan and Kachin states have seen reductions of less than 3% and 7%, which on the ground amounts to a decrease of only 600 hectares in total.

Reductions in cultivation have been somewhat offset by a greater yield per hectare with potential opium production dropping 14% from 2015 levels.

The report reconfirms the link between conflict and opium in Myanmar, and that insecure areas with active insurgencies continue to cultivate and produce at levels similar to 2015. Jeremy Douglas, UNODC Regional Representative, noted that "the connection between governance and security on the one hand and poverty and conflict on the other is undeniable.  We will continue to assist the transition from a dependence on opium to alternative and sustainable economic opportunities. But it cannot be done in isolation from the peace process, and we will need access to additional territory."

He added, "As long as significant parts of Shan and Kachin remain unstable and basically autonomous from the rest of the country and region, the environment will remain a safe haven for those who run the drug trade."

The decline in opium cultivation occurs against the backdrop of a changing regional drug market that has seen a fall in opium and heroin prices over recent years, as most countries in East and Southeast Asia report a shift toward synthetic drugs and especially methamphetamine.

Minister of Home Affairs General Kyaw Swe acknowledged that further effort will be needed to effectively address the high volumes of opium, heroin and other drugs produced in Myanmar. He commented that "the Government of Myanmar is pleased to see progress, but also agrees that while much has been done there is still much to do, and we will continue to support programmes that provide meaningful alternatives to communities that produce opium. We will also work with UNODC and our neighbours to address the production and trafficking of drugs and precursor chemicals."

Troels Vester, UNODC Country Manager, emphasized the importance of sustainable alternative development initiatives, noting "Myanmar has taken important steps to address opium cultivation, especially in South Shan where we are running a programme together. But we also recognise that there is still a huge amount of work to be done and sustained support will be critical to our efforts."