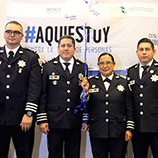 As part of ongoing efforts, the National Security Commission of Mexico organized the first Hemispheric Summit on Human Trafficking in December, where representatives of 33 Police Forces in the Americas signed a declaration against this crime.

Participating on behalf of UNODC, Antonino De Leo, Representative of the Liaison and Partnership Office in Mexico, presented the #AQUIESTOY campaign launched in July this year. He said: "protecting victims, preventing human trafficking and prosecuting the traffickers are UNODC's core elements to combat this crime. These have guided our actions for the past twelve years."

Felipe De La Torre, UNODC Programme Management Officer, presented the results achieved, noting that the campaign has been fully supported by the Mexican Government. To date, #AQUIESTOY has generated more than 12 million impressions on Twitter and the website recorded 10,000 visits. Since the campaign's launch, Mexico's National Human Trafficking Hotline received an average of 127 calls per month, with October being the peak month.

The campaign, financed by the US Department of State, uses the Braille system in the printed materials and closed caption subtitles in the videos. On that point, Mr. De La Torre said: "This is the only anti-human trafficking campaign that is accessible for people with hearing and visual disabilities."