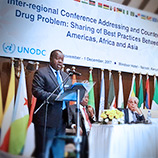 20 December 2017 - UNODC and the Government of Kenya recently welcomed officials from Africa, Latin America and West Asia in Nairobi to review challenges and share lessons learned in countering the world drug problem.

Organized in support of UNODC's Regional Programme for Promoting the Rule of Law and Human Security in Eastern Africa (2016-2021), the inter-regional conference provided a platform for those affected by the trafficking and use of illicit drugs. The first of its kind event sought to improve national and regional responses by fostering cooperation and promoting a balanced approach that addresses the supply of illicit drugs as well as the health and social consequences of drug use.

In his opening remarks, Fred O. Matiang'i, Cabinet Secretary of the Ministry for Interior and Coordination of National Government of Kenya, said: "It is opportune that this Conference is taking place at a time when countries around the world are at cross-roads in combatting drug trafficking and the associated problems."

Acknowledging the nexus between drug trafficking, corruption and other forms of organized crime, he expressed hope that the conference would provide solutions to those challenges.

Also participating, Jose Vila del Castillo, UNODC Regional Representative for Eastern Africa, underscored the need to work together: "It is critical not only to address the threat of drug trafficking at sea and on land, but also to identify, investigate and confiscate the billions of dollars associated with this crime."

Throughout the event, participants from 24 countries shared their national experiences and discussed concrete steps towards an effective drug response in the areas of law enforcement and international cooperation, criminal justice and anti-corruption, as well as health and social development.

The conference concluded with a ministerial segment, at which an outcome document was presented, providing a number of recommendations to better address the drug problem. At the same session, UNODC presented an overview of the Regional Programme's major achievements in 2017.

"There is a light at the end of the tunnel as we have learnt from other countries especially those in the Americas," said Githu Muigai, Attorney General of Kenya, speaking during the ministerial segment. "From the outcome document, it is evident that there are several steps that need to be taken based on the best practices to address this problem," he added.

The trafficking of illicit drugs in Eastern Africa is inextricably linked to transnational organized crime and corruption, posing a significant threat to regional security, stability and public health. UNODC works closely with Member States to promote regional cooperation and strengthen capacities to address both drug supply and demand through a balanced and public-health oriented approach.