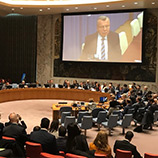 21 December 2017 - In recent years attention has shifted away from the threat posed by illicit drugs, the Executive Director of the UN Office on Drugs and Crime, Yury Fedotov, told the UN Security Council today.

"We must reverse this trend, or risk the further expansion and destabilizing influence of non-state actors, organized criminal groups and violent terrorists", he said.

For the international community to respond, Mr. Fedotov set out a number of priority steps, including support for the implementation of the Afghan National Drug Action Plan.

He said operational responses focused on building the capacity of the country's counter-narcotics efforts and strengthening regional and international cooperation were essential.

Mr. Fedotov called for a building up of "interdiction capacities of key countries along trafficking routes, with an eye to enhancing long-term effectiveness rather than focusing on immediate seizures".

He emphasized the severing of illicit financial flows, and the need to support effective prosecution, as well as asset confiscation and recovery. Mr. Fedotov said increased prevention and treatment responses were required as Afghanistan was struggling with the health consequences of opiate misuse.

UNODC was ready and willing to support both Afghanistan and the international community in all these areas, he said.

Mr. Fedotov was speaking via video-link at the Council's quarterly debate on Afghanistan that considered the Report of the Secretary-General on the situation in the country and its implications for international peace and security. The head of the UN Assistance Mission in Afghanistan, Tadamichi Yamamoto, also briefed the Council .

According to UNODC's most recent Afghan Opium Survey 2017 the area under poppy cultivation rose 63 per cent, while production of opium has climbed 87 per cent to an estimated 9,000 metric tons.