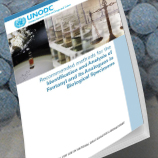 14 December 2017 - Recent years have seen a sharp global rise in opioid overdose deaths. While such deaths were initially localised in North America, they now occur in some European countries, attributable to street heroin adulterated with clandestinely produced fentanyl and its analogues.

To assist Member States in addressing this challenge, UNODC's Laboratory and Forensic Services Programme recently published a manual for forensic laboratories, entitled " Recommended Methods for the Identification and Analysis of Fentanyl and its Analogues in Biological Specimens".

Speaking about the publication, Angela Me, UNODC's Head of Research and Trend Analysis Branch, said: "Enhancing the capacity of law enforcement agencies and national laboratories in identifying and reporting on these substances is critical to understanding the nature and extent of the current opioid crisis. It is a key step in obtaining evidence-based information for effective international response."

In the United States, opioid overdose deaths in 2015 were over 33,000, exceeding all other drug-related deaths or traffic fatalities. Between January and June 2017, Canada reported that 65 per cent of all analysed heroin samples contained fentanyl or one of its analogues. Similarly, the European Monitoring Centre for Drugs and Drug addiction reported over 60 deaths associated with the use of carfentanil* in the continent.

Fentanyl is a narcotic analgesic used in cancer pain relief and surgical anaesthesia, and it is on the World Health Organization's list of essential medicines. There are four fentanyl analogues used as pharmaceuticals and a total of 15 are under international control.

Identification of fentanyl analogues in cases of poisonings and fatalities as well as in overdose deaths remains a major challenge. Fentanyl analogues can be present in adulterated drug samples in small amounts, making their detection and identification difficult. Such circumstances obstruct obtaining accurate information on the scope and extent of the problem at the global level.

Since 2012, more than 20 non-controlled fentanyl derivatives have been reported to UNODC's early warning advisory on new psychoactive substances. The potencies of these fentanyl analogues can range from 10 to several thousand times when compared with morphine.

*a veterinary pharmaceutical with a potency 10000 times that of morphine