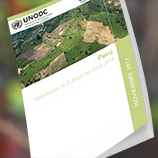 5 December 2017 - The surface used to grow coca leaf crops in Peru in 2016 increased by 9 per cent, which is the lowest increase in the region, according to the latest Peru Coca Survey, launched in Lima today. The area under cultivation grew by more than 3,500 hectares (ha) in 2016, compared to 2015. The report, jointly produced by UNODC and the country's Government, indicates that the area used for cultivating the raw material for cocaine production increased from 40,300 hectares to 43,900 hectares.

Speaking at the event, UNODC's Representative in Peru, Kristian Hölge, highlighted that since there had been an increase in coca cultivation in the region "we need to be on alert and strive to improve methodologies and use of new technology, as well as promote new research initiatives in support of the implementation of the National Strategy against Drugs 2017-2021."

Under the country's plan for reducing the illegal coca growing area, according to the Peruvian Government eradication in 2016 was still high at 30,151 ha. The areas impacted by these eradication actions are Aguaytia, Alto Huallaga, Pichis-Palcazu-Pachitea, San Gabán and Orellana. The Apurimac, Ene and Mantaro River Valleys (known for its Spanish acronym of VRAEM), which is the top coca producing area in Peru, showed an increase of 11 per cent in the coca leaf cultivated surface.

Additional analysis contained in the survey focuses on addressing the extent of coca crops in national protected areas and in Amazon native communities' lands. In this period, 168 hectares of coca crops in production have been detected on national protected areas, and about 5,600 hectares on their buffer zones. Concerning native communities, Shimpenchariato and Gran Shinongari were the most affected with 703 hectares and 292 hectares of coca respectively.

Production of sun-dried coca leaves in 2016, which are used by drug traffickers to produce coca paste and cocaine hydrochloride, stood at some 105,960 metric tons (MT), an increase of 10 per cent compared with 2015. As in previous years, 10,728 MT of the total production is used for the traditional practice of coca leaf chewing and 163 MT for industrial production, according to official data, while the remaining 95,069 tons of coca leaf were linked to drug trafficking. The VRAEM region accounted for 77 per cent of this production.