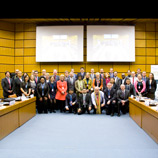 10 February 2017 - Following the development of guidance material on the management of violent extremist prisoners and on prison-based rehabilitation programmes, UNODC's Justice Section hosted today more than 30 senior level prison officials from around the world, together with representatives from prison inspection mechanisms and other relevant partners, in order to review a checklist which will assist Member States in assessing compliance with The United Nations Standard Minimum Rules for the Treatment of Prisoners ("the Nelson Mandela Rules").

The adoption by the General Assembly of the Nelson Mandela Rules in December 2015 represented a landmark achievement for the international normative framework applicable to prison management. "The hard work which Member States and other partners invested into this process has ensured the continued relevance of prison rules in the 21st century", noted Mr. Aldo Lale-Demoz, UNODC's Deputy Executive Director, during the opening": "It has also created a new - and very much needed - international spotlight on prison conditions, management and the treatment of prisoners. I think we can all agree that safe prisons promote human rights, advance the right to health and contribute to communities safe from crime".

The Nelson Mandela rules also form the normative cornerstone of UNODC's new Global Programme on Addressing Prison Challenges, which was launched to build on this momentum for prison reform. Forming part of this programme, this week's Expert Group was convened to assist national prison administrations in assessing and improving compliance of prison management with the rules in practice. More specifically, experts worked on refining a checklist which can serve either (i) as a basis for newly established internal inspection mechanisms in prison administrations, or (ii) as a tool for revising existing inspection methods and tools in line with international minimum standards.  As such, the meeting directly responded to one specific innovation in the rules, namely the need for a two-fold system of external (independent) and internal inspections of prisons and penal services. Numerous Member States have indeed started with reviewing their prison laws and policies in light of the Nelson Mandela Rules. 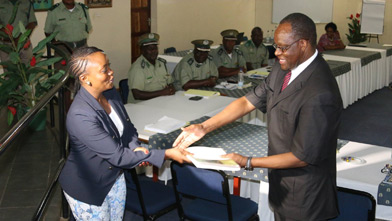 In Zambia, for example, the Correctional Service convened a high-level consultative meeting in December 2016 to review the national Prison Act with a view to incorporate key provisions of the UN Standard Minimum Rules. The event, organized with the support of UNODC, was opened by Chileshe Mulenga, Permanent Secretary in the Ministry of Home Affairs, who highlighted that "our aspiration is to make sure we have a Zambia that observes and respects the rights of all human beings within her borders; including those in prisons". He further observed that prisons were not meant to punish but to reform people, so that they can also contribute to national development once released. A key objective is to change the mindset of correctional staff from a regimental/punitive culture to a correctional model. In light of this focus on staff training and as an immediate form of support, UNODC shared with the Zambia Correctional Staff Training College its extensive series of prison management handbooks and curricula.

UNODC's Expert Group Meeting in Vienna, supported by the Government of Germany, included a presentation by representatives from Algeria, Brazil, Thailand and the U.S., who elaborated on the internal inspection systems in place in their national prison systems. Furthermore, the attendance of representatives from the United Nations Sub-Committee on the Prevention of Torture and the International Committee of the Red Cross, amongst others, also ensured a constructive exchange with mechanisms and organizations in charge of independent inspections, or which have extensive experience in visiting prisons around the world.

Looking beyond this initiative, Thabo Pitswani, Minister Plenipotentiary from the Permanent Mission of South Africa, used the opening of the meeting to reiterate that it would champion the formation of a Vienna-based Group of Friends of the Nelson Mandela Rules. "I would like to reaffirm South Africa's commitment to remain actively engaged in promoting awareness of the rules and to support their practical application in Member States", said Mr. Pitswani.

Such Group would provide for a permanent forum to promote the application of the rules, in order to strengthen UNODC's technical support in the field of prisons reform and to facilitate consultations of interested Member States on the different aspects related to prison management. The Group is also planned to facilitate the widest possible involvement of Member States and other stakeholders in the annual marking of Nelson Mandela International Day (18 July) by promoting humane conditions of imprisonment.

The United Nations Standard Minimum Rules for the Treatment of Prisoners