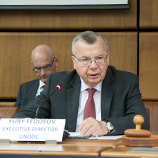 22 June 2017 - Opioids have the most damaging impact on the health of drug users, UNODC Executive Director Yury Fedotov said today.

"The international community has come together to take action to stop this deadly trend, including through initiatives such as the Paris Pact and UNODC's integrated country, regional and global programmes," he said.

Drug use's impact on health, said Mr. Fedotov, was also evident in the related cases of HIV, hepatitis and tuberculosis. This requires more work to be done to provide affordable access to prevention and treatment services, including for people in prisons.

Too many people globally, he said, lack access to pain medication, despite the international drug conventions stress on the need to ensure the availability of controlled substances for medical and scientific purposes, while preventing diversion and misuse.

Mr. Fedotov said interception rates for cocaine and heroin have increased since the 1990s, in parallel with enhanced cross-border collaboration between Member States. International cooperation, therefore, remained at the core of UNODC's efforts.

He added: "The new psychoactive substances (NPS) market, drug use, supply, trafficking routes and the range of the substances on the market continue to shift and diversify at alarming speed." Business models were also changing with criminals exploiting new technologies such as the "dark net" that are altering the nature of the illicit drug trade.

Mr. Fedotov was speaking at the Vienna launch of UNODC's flagship World Drug Report 2017 providing the latest estimates and information on trends and analysis of drug use and supply The report is also being launched simultaneously in New York and Geneva.

In a statement issued today ahead of the International Day Against Drug Abuse and Illicit Trafficking (26th June), Mr. Fedotov said: "UNODC works closely with partners to prevent drugs and crime fuelling and profiting from the instability that undermines development, peace, and human rights."