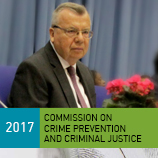 "The broad spectrum of topics addressed this week, along with the nearly one hundred side events scheduled, show the richness and relevance of the CCPCJ," he said.

On human trafficking, Mr. Fedotov said he was proud that Nadia Murad, UNODC Goodwill Ambassador for the Dignity of Survivors of Human Trafficking, was attending the Crime Commission.

"Nadia is the first trafficking survivor to serve as a UN Goodwill Ambassador, and she has been a powerful voice, calling on governments to honour their obligations and open their hearts", he said.

Mr. Fedotov also spoke about the recent global ransomware attacks saying they were not victimless crimes. "The attacks show that anyone, anywhere, can turn technology to criminal purposes, exploit vulnerabilities and potentially lay global systems low," he added.

The UNDOC Chief was speaking at the high level opening of the CCPCJ. Every year, the event draws together around 1,000 participants annually from Member States, civil society and academia.

This year is particularly important as the CCPCJ will begin the process of preparing for the 14th Congress on Crime Prevention and Criminal Justice in Japan in 2020.

A thematic discussion at the CCPCJ will examine crime prevention strategies and public participation, social policies and education in support of the rule of law. Over 100 side events and numerous exhibitions on crime prevention and criminal justice matters will be held during the five days of the Crime Commission.

At the end of the opening session,  a minute of silence was held in tribute to the memory of Under-Secretary-General Giorgio Giacomelli, who served as the founding Executive Director of the United Nations International Drug Control Programme, as well as the Director-General of UNOV, from 1991 to 1997.

Remarks of the UNODC Executive Director, Yury Fedotov, at the opening of the 26th session of the Commission on Crime Prevention and Criminal Justice