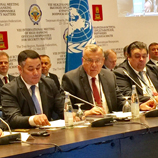 During the conference opening, Mr. Fedotov delivered welcoming remarks on behalf of UN Secretary-General António Guterres who thanked the Russian Federation for hosting the conference. In his own speech, UNODC head said: "Transnational organized crime groups are profiting from asymmetric globalization, a new generation of information and communication technologies, and new ways of doing business."

Mr. Fedotov added that crime challenges were evolving and threatening peace and security, but also hindering sustainable development, the rule of law and harming economies and financial institutions. He said the international community's ability to confront these threats was being tested and they raised a crucial question: "How can we best reinforce these capacities?"

Commenting on the recent devastating ransomware attacks, Mr. Fedotov said UNODC is helping countries to detect, investigate and disrupt cybercrime. But, he warned, "more needs to be done. As we have seen, attacks can be launched by anyone, from anywhere, and we need to strengthen the capacities of all countries to confront cybercrime."

Mr. Fedotov closed his speech with a call to turn the tables on the criminals by drawing on the benefits of our interconnected societies and to make use of the many advances technology has provided.

The UNODC Chief was speaking at the 8th International Meeting of High-Level Officials Responsible for Security Matters; an annual event organized by the Russian Security Council. This year the meeting was held in Zavidovo, a village in the Konakovsky District of Tver Oblast, Russia.