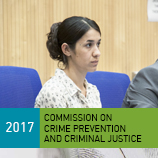 23 May 2017 - "I am so happy to hear that some of the girls kidnapped from their school in Chibok, Nigeria, were released," UNODC Goodwill Ambassador for Human Trafficking, Nadia Murad, told a packed meeting hall during the Crime Commission on 22 May.

Ms. Murad said she identified with the young survivors of the kidnapping by the armed group Boko Haram, but was also concerned about those who remained behind. "I can imagine what those girls, who are still in captivity, are facing every day, because my own relatives and friends are still suffering the same," she added.

Compassion for others is at the heart of Ms. Murad's work as the UNODC  Goodwill Ambassador for Dignity for Survivors of Human Trafficking. She has spoken movingly about her own brutal experiences at the hands of ISIL in the North of Iraq, and she has always done so in the hope of uniting the world against the horrors of trafficking.

Speaking about the impact of human trafficking, Ms. Murad said "trafficking aims to dehumanise the victims, to separate them from their own culture and community, to reduce them to objects to be commercialised." The crime was also linked to conflict and insecurity she noted, "It is used to fund the perpetrators' violence, which means that the buying and selling of human beings is helping to continue this cycle of terror, enveloping ever more victims."

This view was stressed by UNODC Chief, Yury Fedotov, during his own speech at the high-level meeting. He said, "2017 has proven to be another deadly year for thousands of migrants and refugees across the world, many of whom were seeking to escape conflict and violence. Conflicts create favourable conditions for traffickers."

Help was needed to turn victims into the survivors of human trafficking, said Ms. Murad. She admitted it was difficult, if not impossible to completely heal from the experience of being trafficked, but post-conflict assistance and psychological support were critical if survivors were to rebuild their lives.

Her statement also contained a very special commitment to the survivors of human trafficking. "I will do all I can to make the world pay more attention to these crimes, and to take action to hold perpetrators accountable under the full force of the law." She said the criminal treatment of women and children can never be tolerated and the perpetrators must face justice.

Ms. Murad closed her statement with a reflection on her important role. "In speaking out about my own experiences, I hope that the other survivors of human trafficking will be able to find the strength and the dignity that is always inside us," she said.

Other speakers at the event included: Benita Ferrero-Waldner, Representative of the Board of Trustees, UN Voluntary Trust Fund for Victims of Trafficking in Persons, Especially Women and Children, and Marijana Savic, Director of the Serbian NGO Atina.

The UN is increasingly engaged in building support against human trafficking, including where it stems from conflict, as well as in refugee and migration situations.  This is evident in the UN Security Council's adoption of its first resolution in 2015 to counter human trafficking in conflict situations, and the UN General Assembly's Summit for Refugees and Migrants in 2016.

At the end of the summit in the New York Declaration, countries committed themselves to greater efforts to combat human trafficking, ensure protection and assistance to victims and implement relevant international instruments, including the UN Convention against Transnational Organized Crime and the Protocols against human trafficking and migrant smuggling.

On 4 and 5 September, the UN General Assembly will hold a thematic discussion on migrant smuggling, human trafficking and contemporary forms of slavery in Vienna to strengthen action against the traffickers.