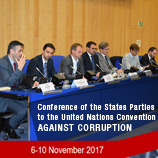 8 November 2017 - "Countries are vital for legislating against sports' corruption, but international organizations also need a voice to show how this crime can be stopped," said session moderator and staff member of the UN Office on Drugs and Crime (UNODC), Ronan O'Laoire.

Asked to define match fixing for the audience, the managing director of integrity services at the multinational company Sportradar, Andreas Krannich, likened the crime to insider trading. He said: "Someone knows the outcome of a specific event and benefits. It is a lot more complicated than deliberately losing a match."

Offering an example of match fixing, Mr. Krannich outlined a 2014 case occurring in Nepal, but also involving criminals in Singapore and Moldova. He said the case revealed the global nature of match fixing, but also underlined the need for "international cooperation and coordination".

On protecting whistle-blowers Mr. Rutherford said World Rugby had found those reporting a problem often did so to those they knew and trusted. Both he and the head of the International Olympic Committee's Ethics and Compliance Office Friedrich Martens said their organizations operated systems designed to protect anonymity.

Discussing the threat posed by organized crime and its impact on sports integrity, Mr. Krannich said, "The core thing in fighting this cancer is the exchange of information and cooperation." He called on the international community to speed up its work because there was a massive trend for organized crime to infiltrate sports as the profit margins were much higher than in many other crimes.

Asked what the audience should take away from the discussion, Mr. Rutherford said: "Coordination between national platforms, governmental agencies, law enforcement. Cooperation is essential to educate, prevent and potentially enforce."

Other speakers at the event were the head of Ethics at Fédération Internationale de Football Association Gautier Aubert; the Advisor of the Head of Italian Government Office for Sport Paolo Bertaccini; and Head of internal auditing and prevention of corruption, Comitato Olimpico Nazionale Italiano, Marco Befera.

Resource Guide on Good Practices in the Investigation of Match-Fixing