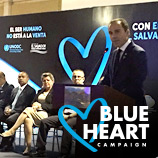 13 November 2017 - El Salvador is the latest country to join the  Blue Heart Campaign against Human Trafficking. Launched by the Government of El Salvador and the UNODC's Office for Central America and the Caribbean, the campaign aims to mobilize governments, civil society organizations, media and the private sector to expose and combat this serious crime.

The launching ceremony, chaired by Oscar Ortiz, Vice-President of El Salvador, together with Amado Philip de Andrés, Regional Representative of UNODC for Central America and the Caribbean, took place at the International Centre of Fairs and Conventions (CIFCO).  More than 350 people attended the event: senior government officials, and representatives of the diplomatic corps, academia, civil society as well as the private sector.

In his opening remarks, Mr. Ortiz expressed his country's commitment and determination to support UNODC's campaign against human trafficking. "People are not a business, they cannot be sold. Today, more than ever, we must work towards the promotion and strengthening of a system based on the rights of our youth and families," he said.

"This is a crime against humanity," declared Mr. de Andrés, emphasizing the importance of prosecuting human trafficking cases. However, as he pointed out, prosecution without protection is not effective.

Also speaking, Maryse Guilbeault, Ambassador of Canada to El Salvador, pointed to her country's efforts in the region. "With the recent introduction of its International Feminist Assistance Policy, Canada is supporting the work carried out to end human trafficking, exploitation and other forms of violence and abuse against women and girls," she added.

In collaboration with Operación Bendición, guests had the opportunity to use virtual reality glasses to observe scenes of trafficking in various countries.

As part of the private sector commitment to end human trafficking, Grupo Agrisal offered to light up in blue Torre Futura (Future Tower), one of the most emblematic corporate buildings in San Salvador.

The Blue Heart Campaign is a global awareness raising initiative to fight human trafficking and its impact on society.