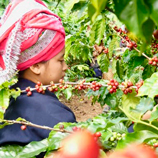 14 December 2018 - Finland, Germany and the United Nations Office on Drugs and Crime (UNODC) Myanmar Country Programme have signed agreements for a total of 6.1 million euro to extend the alternative development programme which provides farmers in drug-crop growing areas with viable alternatives to producing illicit crops. The programme runs in Southern Shan State Myanmar and will be extended for a second phase until December 2022.

In 2012, the Government of Myanmar requested UNODC to support the implementation of a cease-fire arrangement between the Government and some Ethnic Armed Groups through the provision of alternative development projects in South Shan State, which accounts for 90 per cent of the opium poppy cultivation in Myanmar. These projects can help the cease-fire by both reducing illicit drugs that fuel and finance conflict, and by enabling farmers to secure their livelihoods by legal means, such as planting licit crops such as coffee.

In South Shan State the first coffee was planted in 2014 and since then, the alternative development programme in Myanmar achieved significant results. UNODC now works with farmers in 55 villages, implementing a long-term strategy that involves supporting the shift from opium production to high-value permanent and sustainable cash crops, while respecting the environment and promoting gender equality.

To ensure sustainability of the initiative and to guarantee access to the market, a farmers' cooperative, Green Gold, was established in 2015 and now represents 968 members. In close cooperation with the Ministry of Agriculture, the programme supported the issuance of 652 land tenure certificates, covering 515 hectares of coffee plantation.

In 2017, the Green Gold Cooperative signed a five-year partnership agreement with the French company Malongo, and in 2018 exported its first container of selected high-quality coffee to the European market.

The UNODC programme also supported the reforestation of 496 hectares and five small-scale initiatives on sustainable use of forest products, implemented by 28 community forest groups involving 1,539 farmers.

Phase II of the project will focus on growth and sustainability. Green Gold has started to review and adjust its statutes and procurement procedures to begin the process of obtaining organic and fair-trade certifications.

Moreover, according to gender equality standards and women empowerment principles Green Gold changed the structure of its administration, now equally divided with eight male and eight female representatives. Phase II will also intensify efforts to increase the visibility of environmental management, with a strong focus on agro-ecological zoning, agroforestry and reforestation.

"UNODC Myanmar looks forward to continuing to support the farmers in Southern Shan state as they build sustainable conditions for development and income generation in villages that have been affected by armed conflict and illicit crop cultivation," said Troels Vester, UNODC Country Manager in Myanmar. He also noted that "We are delighted to see the trust and support from Finland and Germany, changing the lives of thousands of farmers."

From Opium to Coffee: Green Gold Cooperative Exports its First Container of Coffee to the European Market