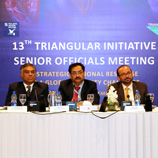 19 December 2018 - The global trade in illicit Afghan opiates has become one of the world's greatest transnational drug and crime threats. Since more than 70 per cent of Afghan opiates are trafficked via Iran and Pakistan, close cooperation between the anti-narcotics forces of these three countries is critical to addressing this threat. The United Nations Office on Drugs and Crime (UNODC) supports such cooperation through the Triangular Initiative.

UNODC facilitated the 13 th Triangular Initiative Senior Officials Meeting on 12 and 13 December in Islamabad, which brought together counter-narcotics authorities of Afghanistan, Iran, and Pakistan to discuss means for strengthening cooperation against the trafficking of Afghan opiates. The meeting was hosted by the Ministry of Narcotics Control of Pakistan.

In his opening remarks, UNODC Representative in Pakistan Cesar Guedes noted: "We believe that strengthening of regional partnership against the massive flow of illicit drugs in the region, within the framework of this strategic collaborative process, can serve as a conduit for saving lives and improving the quality of life."

The Chair of the meeting, Arif Nawaz Khan, Federal Secretary in the Ministry of Narcotics Control of Pakistan, expressed his appreciation for the progress made under the Triangular Initiative through the senior officials' meeting: "It was really heartening for the Government of Pakistan to welcome our regional partners on counter-narcotics. This close interaction has helped in finding workable solutions to our common challenges," he said at the closing ceremony.

Regional cooperation mechanisms agreed under the Triangular Initiative include enhancement of the regional response through information-sharing; planning and conducting drug-interdiction operations; and establishment of Border Liaison Offices (BLOs).

Since its inception in 2007, the UNODC-facilitated Triangular Initiative forum has served as a cornerstone of the regional approach to drug control. It is supported by the Paris Pact Initiative and the Regional Programme for Afghanistan and Neighboring Countries, which encompasses a range of programmes designed to reduce the poppy cultivation, trafficking and consumption of drugs. UNODC offices in the three countries provide technical support to the respective host governments for implementing their commitments under this counter-narcotics forum.