UNODC trains local authorities to fight trafficking of humans, weapons, drugs and other illicit goods off the coast of Yemen 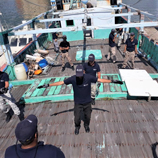 20 December 2018 - The Gulf of Aden is one of the world's most important shipping lanes, 450 miles long, connecting the Indian Ocean, the Red Sea and Suez Channel. 25,000 ships travel through the region every year, carrying 11% of the world's oil and billions of dollars' worth of goods. At the same time the Gulf of Aden, in particularly the Bab el Mandeb strait, runs along one of the most dangerous coastlines in the world: Yemen.

The conflict in Yemen that started in 2015 has resulted in thousands of casualties and internal displacement of millions of Yemeni people creating a unique environment for illegal operations and profit. Moreover, such conditions are quickly spilling over into the maritime domain, involving a range of sophisticated attacks against government forces and infrastructure as well as commercial cargo and fishing vessels.

Playing the region as their own, pirates, organized crime and terrorist groups are constantly looking to seize their opportunity to attack commercial ships or to transport weapons, drugs, humans, migrants, nuclear and other radioactive materials.  Fearless, aggressive and very well prepared, these groups are operating from small motorized skiffs to attack larger vessels, creating an almost impossible challenge to the busy law enforcement agencies in the region.

The Yemeni Coastguard has a key role in addressing these threats with regional and global impact. The UNODC Global Maritime Crime Programme (GMCP) in turn is supporting the coastguard by providing training in visit, board, search and seizure (VBSS) for 15 officers at the GMCP Maritime Law Enforcement Training Centre in Seychelles.

Training spearheaded by the GMCP team encompasses the usual counterfeit drugs and illegal weapons search routines, as well as the seizure of chemical, biological, radiological, nuclear and explosive materials and weapons of mass destruction components and precursors.

Alan Cole, Head of the Global Maritime Crime Programme, said that "Realism is the basis of good training and the Yemen Coast Guard who find themselves between an aggressive armed conflict on shore and all forms of maritime crime at sea have benefited from some of the most realistic maritime law enforcement training available in the world."

Mr. Cole also explained that at the GMCP maritime law enforcement training centres, Member States can train on vessels that have been confiscated from drug traffickers, illegal fishers and pirates. "After three weeks at our centre in Seychelles the coastguard's officers will return to Yemen better prepared to tackle the crime that undermines peace and security in the region," he said.

The commander of the Yemeni Coastguard training detachment has commended GMCP efforts in ensuring that Yemeni sailors received critical training and along this training has requested additional VBSS courses to ensure that the 300 sailors recruited for a variety of roles have the knowledge, skills and confidence required to carry out their assigned duties.

In light of the current situation, training on VBSS operations remains one of the key components in targeting illegal, unreported and unregulated fishing, as well as the smuggling and trafficking of contraband, people and wildlife, along with search and rescue operations. It provides the Yemeni government with the tools needed to reassert its sovereignty and assist in restoring regional stability.

UNODC Regional Office For The Middle East And North Africa