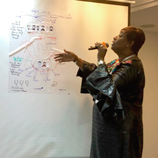 6 December 2018 - The continuous influx of migrants crossing the Sahel and the Mediterranean Sea, making their way from West Africa to Europe is an issue that both West African and European governments are working to address. Among other things, the transnationality of the criminal networks involved in trafficking and smuggling of migrants makes it complex to build and adjudicate cases. An effective response therefore needs to include international judicial cooperation.

Enhanced international cooperation in criminal matters was the focus of the joint plenary meeting of the West African Network of Central Authorities and Prosecutors (WACAP) and the Inter-Agency Asset Recovery Network for West Africa (ARINWA), held in Cotonou, Benin, from 20 to 23 November.

About 100 representatives of sixteen West African States and criminal justice practitioners participated in the meeting. At the event, WACAP and Italy also signed a partnership declaration to enhance international cooperation in criminal matters, including through the exchange of judges and prosecutors.

Pierre Lapaque, UNODC Regional Representative for West and Central Africa, highlighted that UNODC is currently supporting the deployment of a Nigerian prosecutor to Italy. This is possible through the PROMIS "Protection of Migrants" and the "Strengthening the Transnational response to Smuggling of Migrants and Maritime Crime in West, North and East Africa" projects financed by the Netherlands and Italy, respectively.

Mr. Lapaque emphasized that this "concrete and direct cooperation allows to efficiently deal with ongoing cases of mutual legal assistance and extradition requests, in particular regarding smuggling of migrants and trafficking in persons." He further said that "such exchanges of liaison magistrates could soon be extended to other countries."

In his speech, Sévérin Maxime Quenum, Benin's Minister of Justice and Legislation said that "the Beninese government is planning to continue its efforts [to fight transnational organized crime] by putting in place efficient legislative and institutional mechanisms aiming at confiscating the proceeds of crime."

During the plenary meeting, the WACAP and ARINWA contact points worked on a case study inspired by the real Glauco case in which 366 migrants died in the Mediterranean Sea on their way to Italy. The participants shared challenges and good practices on investigating smuggling of migrants and legal cooperation to obtain information and to confiscate the illegal money earned by smugglers. They also discussed tools to be developed to help these efforts.

The aim of these networks of contact points is to provide a mechanism for informal direct contacts that create mutual trust, strengthen capacities and support regional cooperation to more efficiently combat all forms of transnational organized crime.

The West African Network of Central Authorities and Prosecutors (WACAP) is a judicial cooperation network composed of contact points from the 15 countries of the Economic Community of West African States (ECOWAS), Mauritania and Chad. The WACAP, inspired by the European Judicial Network (EJN), aims at strengthening the operational cooperation and capacity of the authorities responsible for international cooperation in criminal matters in West Africa to combat all forms of organized and serious crime, including terrorism. The contact points facilitate the exchange of information on their respective legal systems to deal with requests for mutual legal assistance and extradition. UNODC provides secretariat functions, technical support and training to the network.

UNODC supports the deployment of a Nigerian Prosecutor in Italy