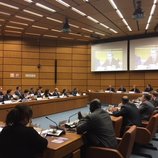 12 February 2018 - What challenges arise when a police investigator requests preservation of electronic data in a foreign jurisdiction, under the control of a private corporation? How can authorities handle the data to guarantee its integrity and authenticity? Can other legal barriers stop a prosecutor from introducing this data as evidence?

In his opening remarks, John Brandolino, Director of UNODC's Division for Treaty Affairs, described the event as a "rare opportunity for investigators, prosecutors and technology industry leaders from around the globe to sit together and identify the most effective practices to solve the complex problems of electronic data."

At the meeting, the participants actively contributed their views on the draft Practical Guide on Requesting and Gathering Electronic Evidence. Almost all transnational cases involving terrorist activities or organized crime require guidance concerning lawfully targeted online surveillance, securing of electronic evidence, and requests to remove information from online sources. The guide, in this regard, will expand existing UNODC resources to include practical and country-specific guidance.

Mr. Eirik Trønnes Hansen, Prosecutor of the National Criminal Investigation Service of Norway, said: "Discussing challenges to international cooperation is a valuable part of the process to ensure the guide's quality for obtaining electronic evidence from foreign jurisdictions."

Representatives of France, Kenya, and China welcomed the comprehensive and substantive discussions, and noted the value of the Practical Guide as a resource for drafting national laws.

Also participating in the event were experts in digital investigations, transnational crime and criminal justice, as well as legal officers from Facebook, Google and Microsoft.

The meeting was organized under the UNODC, CTED and IAP joint project "Strengthening the Capacity of Central Authorities and Counter-Terrorism Prosecutors and Investigators in Obtaining Digital Evidence from Private Communications Service Providers in Cross-Border Investigations". The project is funded by the United States.