Nelson Mandela Centenary: UNODC reiterates need for humane approach to prison management - We must not forget those behind bars 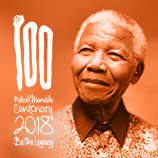 18 July 2018 - Today marks what would have been the 100th birthday of Nelson Mandela. Honouring his centenary and outstanding contribution to a culture of peace and freedom, UNODC draws attention to the more than 10 million prisoners worldwide as well as to the work of those entrusted with their safe, secure and humane custody.

In a statement released today, UNODC Executive Director Yury Fedotov said: "The legacy of Nelson Mandela is vast, his life of service encompassing contributions to peace and reconciliation, promotion and protection of human rights, the fight against poverty and the advancement of social justice."

"This centenary is an occasion to honour the legacy of the late President of South Africa, and reflect on how we can carry on his commitment," Mr. Fedotov added.

UNODC's work with prisons is longstanding and diverse. As a direct follow-up to the adoption of the Nelson Mandela Rules in 2015, the Office developed a dedicated Global Programme on Addressing Prison Challenges.  However, significant work remains to be done to address issues, including overcrowding, poor prison conditions, violence, high rates of recidivism and, more recently, the risk of radicalization to violence in prisons.

On that point, Mr. Fedotov said: "I reaffirm the determination of UNODC to assist all countries in translating these rules into action, to promote humane conditions of imprisonment and ensure no part of society is forgotten."

With a view to building momentum in prison reform, UNODC has developed a groundbreaking guidance material: the first Checklist to Assess compliance with the Nelson Mandela Rules. The publication aims at assisting internal inspection mechanisms in national prison administrations. Further, to raise awareness on the core messages of the Rules, the Office has disseminated over one thousand copies of its recently released Instructional Placards on the Nelson Mandela Rules to Member States.

UNODC is currently developing the first e-learning course on the Nelson Mandela Rules. Tailored to the needs of front-line prison staff, the course will include practical scenarios of prison management, which are currently filmed in Switzerland and Algeria. With this innovative approach, users will be able to determine the storyline and be shown the consequences of his or her action. The long-awaited course is expected to be launched at the 28th session of the Commission on Crime Prevention and Criminal Justice in 2019.

Further, under the Doha Declaration Global Programme, UNODC focusses on rehabilitation programmes in prisons and post-release services to ensure, as much as possible, that prisoners are willing and able to lead law-abiding lives upon release - an indispensable approach to reduce recidivism and to contribute to public safety.

Summary: The revision process of the Standard Minimum Rules for the Treatment of Prisoners