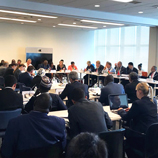 3 July 2018 - UNODC co-organized with Côte d'Ivoire, Equatorial Guinea, Ethiopia, the Netherlands, and the United States an Arria-formula meeting on maritime crime as a threat to international peace and security.

The meeting, recently held in New York, provided a platform for the Security Council to address the common and interlinked emerging crimes at sea, including piracy and armed robbery, arms and drug trafficking, fisheries crime, smuggling of migrants and trafficking in persons.

Mr. Cole said: "Security Council will consider identifying maritime crime as a threat to peace and security and, consequently, further examine what changes could be made to the enforcement framework to improve the effectiveness of international efforts".

In this regard, the meeting provided Member States with an opportunity to discuss good practices and to identify challenges in international cooperation at the legal and operational levels concerning crimes at sea.

During the meeting, Member States highlighted how maritime piracy threatens vital sea lanes of communication, economic interests and the security of coastal States. They emphasized the need to support comprehensive capability development and capacity building in regions affected by maritime insecurity and threats. Among other things, participants called for new networks of investigators and prosecutors and other initiatives aimed at facilitating mutual legal assistance against maritime crimes.