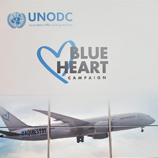 5 June 2018 - In 2018, 4.3 billion travelers are expected to board planes on over 20,000 city pairs. While airlines provide a tremendous force for good, their services can be misused by criminals to facilitate the trafficking of men, women and children.

Airline leaders and representatives of international organizations have gathered in Sydney, Australia this week for the 74th International Air Transport Association (IATA) Annual General Meeting and World Air Transport Summit, and discussed, among others, how the industry can help to prevent this crime.

Speaking at the opening session, Sir Peter Cosgrove, the Governor-General of the Commonwealth of Australia, welcomed the airline industry's discussion on the fight against human trafficking, a serious crime and a grave violation of human rights.

Addressing the meeting via a video message, Mr. Jean-Luc Lemahieu, UNODC Director of the Division for Policy Analysis and Public Affairs, said that human trafficking is a transnational crime happening everywhere.

"We are looking to transportation companies for their help in the fight against human trafficking by being an additional set of compassionate eyes and ears," Mr. Lemahieu said, adding: "Given that their staff contact and spend time with passengers, particularly cabin crew onboard flights, airlines and the wider aviation industry is well placed to help."

It is estimated that 24.9 million people are trafficked globally every year, equivalent to the total population of Australia. Women and girls make up more than 70 per cent of human trafficking victims, condemned into a life of exploitation and suffering.

Recognizing the support and leadership of the airline sector to end this menace, Mr. Lemahieu cited Aeromexico's endorsement of the Blue Heart Campaign: #AquiEstoy contra la trata de personas (#HereIAm against trafficking in persons). "Together we can help end this horrific trade in human misery," he underlined.

In a video message, Mira Sorvino, UNODC Goodwill Ambassador for Global Fight against Human Trafficking, said: "I've seen how the United Nations, non-governmental organizations and the private sector can work together to raise awareness and collaborate on crucial prevention initiatives such as the Blue Heart Campaign."

"The Campaign supports the United Nations Voluntary Trust Fund, which helps trafficked persons, and especially women and children," she continued, while drawing attention to the "Be Aware of the Signs" leaflet, which was designed by UNODC for the airline sector to help detect human trafficking.

A UNODC booth at the annual meeting complements UNODC's presence and reinforces the Blue Heart as the global symbol against human trafficking, while providing information about UNODC and its ongoing campaigns.

The 74th IATA Annual General Meeting and World Air Transport Summit, hosted by Qantas, brought together over 1000 delegates and media, as well as representatives from some 280 airlines to Sydney, Australia.