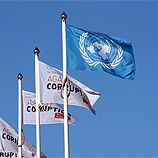 29 March 2017 - Further steps were taken towards the creation of a regional forum on anti-corruption in public procurement for Eastern Africa as 35 governmental representatives and civil society organizations gathered in Arusha, Tanzania last week to discuss public procurement and whistleblower protection.

Organized by UNODC, the regional conference took place from 20 to 23 March, under the theme "Follow-up to the workshop on Fast-tracking the Implementation of UN Convention against Corruption (UNCAC): Implementation of recommendations".

Speaking at the event, Munira Ali, Secretary-General of the Eastern African Association of Anti-Corruption Authorities (EAAACA) said: "Combining procurement and whistleblower protection under the Association's leadership will be a powerful tool in the region's armory against corruption".

At the event, hosted by EAAACA, participants discussed current challenges and decided to establish a Regional Public Procurement Anti-Corruption Forum (RPPAF) with a view to advancing cross-regional anti-corruption and procurement strategies.

The Forum will be constituted by a country-specific National Public Procurement Anti-Corruption Task-Force for Burundi, Djibouti, Ethiopia, Kenya, Rwanda, Tanzania and Uganda. It is envisaged to reconvene in six months to discuss progress made.

As part of the event, the whistleblower protection workshop took a broad look at relevant legal frameworks. Given the substantial regional differences on States' legislation and conditions, the workshop focused on how the implementation is taking place in practice, and where the establishment and standardization of regulations and procedures could effectively form. Follow-up action will take place at the regional and national levels, with a focus on continued learning and peer-to-peer training.

With the participation of governments, judiciary and civil society, the event presented an opportunity to fill the latent gaps in knowledge between different sectors and actors, and explored how regional measures could strengthen UNCAC implementation in East Africa.

The Arusha conference represents the next stage in the United Kingdom's support to UNODC in fast tracking the UNCAC implementation through the UK Prosperity Fund. UNCAC is the only legally binding universal anti-corruption instrument with 183 States Parties.