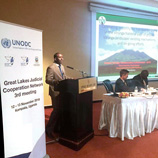 19 November 2018 - Prosecutors and legal experts from Africa's Great Lakes region met in the capital of Uganda, Kampala from 12 to 13 November 2018 and, amongst others, agreed to use the UN Convention against Transnational Organized Crime (UNTOC) for international cooperation against wildlife crime.

This was the third meeting of the Great Lakes Regional Judicial Cooperation Network (GLCJN) and Member States concurred that to be able to use UNTOC as a legal basis for international cooperation, wildlife crime would need to have a penalty of four or more years in domestic legislation. Participants further agreed to share data on wildlife trafficking cases and contribute to the UNODC SHERLOC case law and legislative database.

Another notable outcome of the meeting was that Member States agreed to accelerate the domestication of the protocols of the International Conference of Great Lakes Region (ICGLR) and UNTOC to speed up the management of wildlife cases. During the meeting, prosecutors and focal points also discussed challenges and progress made in addressing concrete transborder judicial cases identified at their June 2018 meeting in Dar-es-Salaam.

Delivering a statement on behalf of Susan Eckey, the Norwegian Ambassador to Uganda, Robert Hovde, Counsellor at the Embassy said that "the Great Lakes region has an immense abundance and diversity of natural resources, from a range of minerals to rainforest and wildlife. If managed sustainably and democratically, these riches could offer a huge potential for development and prosperity." Mr. Hovde went on to say that illegal exploitation of and trade in these resources are key drivers for continued conflict and instability and a source of suffering and misery for the population.

In his opening statement, Mike Chibita, the Director of Public Prosecution of Uganda stated that "The abundance and diversity of wildlife species in the Great Lakes Region is under serious threat. Never before in the history of this region has there been such a serious threat to our wildlife than it is now." He continued by saying that in addition to incarceration, the judicial system must ensure that all the wealth gained from these illegal activities is recovered and forfeited.

The meeting identified what GLCJN could do to support cooperation between authorities in the Great Lakes region in the prosecution of cases related to wildlife and resources management, for example, in tracing and confiscating the proceeds of illicit trafficking.

UNODC Senior Legal Expert Karen Kramer said that "strengthening central and competent authorities for international cooperation is crucial for obtaining information and evidence from other countries to prosecute wildlife crimes and to seize and confiscate the illegal profits made from trafficking in wildlife."

On the basis of UN Security Resolutions 1291 and 1304 which calls for peace, security, democracy and development in the Great Lakes region, these 12 African countries also form part of the intergovernmental organization called the International Conference of Great Lakes Region (ICGLR).

This meeting was funded by a contribution from Norway to implement UNODC programmes that are working together to disrupt environmental crime markets.

The meeting was organized jointly by ICGLR, the Office of the United Nations Special Envoy for the Great Lakes region and UNODC.   Participants at the meeting included directors of public prosecutions and focal points from the ICGLR network, external experts on wildlife crime such as the Greater Virunga Transboundary Collaboration (GVTC), African Wildlife Foundation (AWF), Trade Records Analysis of Flora and Fauna in Commerce (TRAFFIC) and selected civil society organisations. Other participants included representatives from UNODC, the Office of the Special Envoy of the Secretary-General for the Great Lakes Region, the UN Group of Experts in the Democratic Republic of Congo and members of the diplomatic community.

UNODC on Wildlife and forest crime