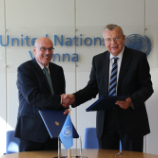 The joint briefing informed Member States about the current status of the implementation of the first institutional reform of the UN Secretary-General to review counter-terrorism efforts of the United Nations. It also offered a unique opportunity to show the fruitful cooperation between UNODC and the United Nations Office on Counter-Terrorism (UNOCT) in this field, with the aim to ensure coherence when coordinating support to Member States.

Prior to the Briefing, UNODC and UNOCT signed a Strategic Partnership Framework Agreement, to enhance cooperation and strengthen collaboration by means of increased information sharing and enhanced support to requesting Member States in the area of countering terrorism and preventing violent extremism as and when conducive to terrorism. It also aims to ensure heightened synergy between both entities and ultimately better fine-tune a "One-UN" approach.

In addition, the briefing also shed light on the UN's efforts in implementing the Global Counter-Terrorism Coordination Compact that was signed by the UN Secretary-General and 36 United Nations entities as well as INTERPOL and the World Customs Organization earlier this year. The objective of the Compact is to support implementation of the United Nations Global Counter-Terrorism Strategy and to further ensure relevant capacity-building and enhanced coordination and coherence between the Compact's members.