A joint INTERPOL-UNODC operation against illicit firearms trafficking in West Africa has seen arrests and the seizure of firearms and ammunition. 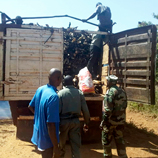 23 December 2019 - A cross-border operation across West Africa codenamed "KAFO" 1, jointly coordinated by the United Nations Office on Drugs and Crime (UNODC) and the INTERPOL Firearms Programme, targeted the people and networks behind firearms trafficking in Burkina Faso, Cote d'Ivoire and Mali.

1 KAFO means active solidarity or union in action in both Haoussa and Bambara, common languages for the three targeted countries.