UNODC, OSCE and IOM jointly explore how to best tackle human trafficking and smuggling in migrants 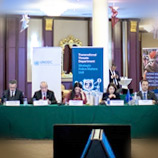 Valletta (Malta), 18 December 2019 -  The Organization for Security and Cooperation in Europe (OSCE), the United Nations Office on Drugs and Crime (UNODC) and the International Organization for Migration (IOM) brought together international experts, representatives of 17 countries and international and civil society organizations in Malta from 9 to 10 December to jointly discuss current challenges, and look at how trafficking and smuggling in persons might best be tackled.

Technology and the popularity of low-cost flights have made travelling significantly easier and often cheaper too. But not for everyone. Over 4,000 people died during migratory journeys between countries in 2018, according to IOM's Missing Migrants Project, while the most recent figures from the UN Office on Drugs and Crime indicate that smuggling of migrants generates an annual US$ 5-7 billion dollars.

Trafficking in human beings and smuggling of migrants are widely recognized as contemporary threats to the well-being of society. Many migrants continue to be vulnerable to rights violations in transit, at their destination, and during or following their return. Also, organized crime groups connect beyond boundaries to increase their revenue, which is reinvested in weapons, drugs and other illicit and licit businesses through money laundering schemes, the meeting heard.

The workshop highlighted the need to complement policies and legal frameworks with operational protocols and capacity building programmes at local, regional and national level to prevent and combat human trafficking and smuggling of migrants. The participants agreed community engagement is of primary importance for the successful prosecution of criminals, and protection of witnesses and victims.