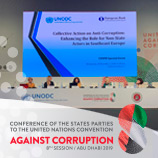 20 December 2019 - In the midst of the eighth session of the Conference of the State Parties (CoSP8) to the United Nations Convention against Corruption (UNCAC), the United Nations Office on Drugs and Crime (UNODC) Civil Society Team, in partnership with the European Bank for Reconstruction and Development (EBRD), held a special event to present ideas and best practices in collective action initiatives for the implementation of UNCAC in Southeast Europe (SEE).

The event, held on 18 December in Abu Dhabi, also reiterated a strong commitment to the Belgrade Outcome Statement that lays out concrete and practical steps towards cooperation on anti-corruption.

The panel was moderated by Biljana Ivanoska, from the North Macedonian State Commission for Prevention of Corruption, who stressed the valuable contributions that civil society organisations (CSOs) and private sector entities made to the second cycle review of UNCAC implementation in the country. Among the entities involved in the review was the Macedonian Centre for International Cooperation. Representing the organization, Emina Nuredinoska noted that the Platform of Civil Society Organizations in the Fight Against Corruption, established five years ago, is highly active in supporting the drafting of anti-corruption laws and policies, further adding that the Ministry of Justice has been strong champions of cooperation with CSOs.

Slagjana Taseva of the UNCAC Coalition said that "Collective action needs to be seen in broader sense not only as a CSO and government cooperation, the broader definition of collective action asks for participation of all actors in a society. Even the CoSP is a collective action where officials, experts and CSO representatives are debating different solutions and possibilities for the implementation of the Convention".

UNODC, through three multi-stakeholder workshops in Southeast Europe, trained over 70 CSOs, 40 Private sector entities and governments on the Convention and on the ways to make good governance more effective. Ardita Seknaj, Secretary General of ICC Albania, observed how useful these workshops have been in identifying local and regional partners and how they contributed to the birth of fruitful initiatives such as the he Week of Integrity: the Conference on Integrity & Anti-corruption, scheduled to take place in Albania in early 2020. Notably, the workshops have been instrumental in fostering multi-stakeholder collaboration, and so too the eighth session of the COSP, which is being attended by over one hundred CSOs.

This month, UNODC and EBRD will sign a Memorandum of Understanding to institutionalize partnership in the area of good governance and recognize joint commitment towards collective action in preventing corruption.