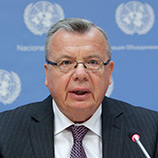 The debate, organized under the Presidency of Equatorial Guinea and chaired by Minister of Foreign Affairs Simeon Oyono Esono Angue, is the first to focus on the global challenge of transnational maritime crime.

"Two-thirds of the world's surface is ocean. Nearly all of that is beyond any state's territorial waters and largely not subject to a single state criminal jurisdiction," said the UNODC Executive Director in his briefing via video teleconference.

"The high seas are open for vessels of all countries, both coastal and landlocked, to support international trade and economic cooperation, contact among peoples and the responsible use of natural resources. However, in recent years the freedom of navigation is being exploited by criminal groups. Transnational maritime crime is increasingly sophisticated, and it is expanding, both in terms of size and types of criminal activities."

Mr. Fedotov emphasized the difficulties in preventing and responding to maritime crime, which often involves vessels, cargoes, crews and finance from different regions.  He highlighted the work of UNODC to support countries to counter crimes including:

"These crimes pose an immediate danger to people's lives and safety, they undermine human rights, hinder sustainable development and, as this Council has recognized, they threaten international peace and security," he said.

Mr. Fedotov emphasized the importance of all countries ratifying and implementing international commitments, including the UN Convention against Transnational Organized Crime and its protocols, and providing technical assistance. He welcomed the Security Council's continued engagement to help strengthen cooperative action against transnational maritime crime.

UN Convention against Transnational Organized Crime and its protocols