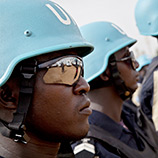 Bamako, Mali, 31 January 2019 - In countries affected by conflict, human trafficking and migrant smuggling not only threaten civilians, but also jeopardise efforts towards peace and stability.

In recent years, brutal acts of human trafficking committed by armed and terrorist groups have shocked the international community, which has expressed its determination to step up the fight against these horrendous crimes.

Acknowledging that UN peace operations are key players in this effort, the United Nations Security Council has called for the reinforcement of their response to trafficking and smuggling.

Against this backdrop, UNODC, in cooperation with the Department of Peace Operations (DPO), organized in Bamako, Mali, the first-ever train-the-trainers workshop on human trafficking and migrant smuggling for UN police (UNPOL) personnel.

UN police officers deployed in the UN Multidimensional Integrated Stabilization Mission in Mali (MINUSMA) have a critical operational role on the ground. Empowering them to better identify and report cases of human trafficking and migrant smuggling will help protect victims among civilians and strengthen understanding of the nexus between trafficking, smuggling and armed conflict in Mali.

During the workshop, UNODC trained a pool of UNPOL trainers and piloted an induction training module for UNPOL officers joining MINUSMA, aiming precisely at increasing their capacity to detect trafficking and smuggling.

The training project for MINUSMA UNPOL was funded by Switzerland. Going forward, UNODC plans to roll out the training module in other mission settings with similar needs, adapting in to the local context and mission mandate.