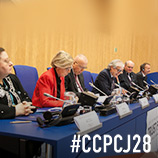 Vienna, 21 May 2019 - Nine countries signed up to the Blue Heart Campaign against Human Trafficking at a side event on the United Nations Office on Drugs and Crime (UNODC) Blue Heart awareness-raising initiative and UN Voluntary Trust Fund for Victims of Human Trafficking (UNVTF), held on 20 May during the 28th Crime Commission.

Belarus, Belgium, the Dominican Republic, Ecuador, France, Israel, Italy, Romania and Sweden joined the campaign, which works to raise awareness of the plight of victims of human trafficking and build support to fight the criminals behind this crime. The total number of countries part of the initiative is now 26.

UNODC Executive Director Yury Fedotov said that "The Blue Heart is a powerful symbol reminding people that we all have a role, and indeed a responsibility, in preventing and combatting human trafficking. My heartfelt thanks go to the many Blue Heart supporters and Trust Fund donors."

The General Secretary of France for the Protection of Women Against Violence and the Fight Against Trafficking in Human Beings, Elisabeth Moiron-Braud said that "I am very happy to announce that France, alongside a number of other countries, is signing up to the Blue Heart Campaign today to fight against the trafficking of human beings and for the restoration of the dignity and humanity that has been denied the millions of victims of this crime worldwide."

The Permanent Representative of Belgium, Ghislain D'hoop, said that in signing the Blue Heart campaign, "Belgium sends a strong signal to the international community, but especially to all victims, worldwide, of human trafficking: you are not alone, you are not forgotten, we care about you, we want to fight the crimes and intolerable treatment you have been subject to, and we want to help give hope for a better future, a dignified life free from fear, where the respect of human dignity and universal values prevails."

During the second half of the event, Dr. Benita Ferrero-Waldner, Chair of the Trust Fund Board of Trustees, presented the achievements of the Trust Fund for victims and highlighted the fact that the Trust Fund has provided USD 3.4 million in grants to 59 specialized NGOs worldwide and directly assists approximately 3,500 victims per year in over 40 countries. Dr. Ferrero-Waldner noted that at least 90 percent of Trust Fund projects over the last years supported women and girls victims trafficked mainly for sexual exploitation.

NGOs from Freedom Foundation and CISS shared good practices from Nigeria and Italy respectively in providing direct assistance to victims of trafficking, with the aim of helping survivors rebuild their lives.

The United Nations Office on Drugs and Crime (UNODC) launched the Blue heart Campaign in 2008 to encourage involvement from governments, civil society, the corporate sector and individuals alike, to inspire action and help prevent human trafficking.

The Blue Heart is increasingly recognized as the international symbol against human trafficking, representing the sadness of those who are trafficked while reminding us of the cold-heartedness of those who buy and sell fellow human beings.

Video summary of the event