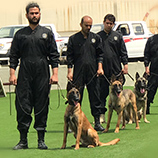 Tehran (Iran), 28 October 2019 - For the past seven years, the United Nations Office on Drugs and Crime (UNODC) has been supporting the work of the Iranian Customs Organization dog-training Center through the provision of technical assistance, drug-detecting dogs and training of both dogs and handlers.

The Center has seen some remarkable successes. For example, in summer of 2019, the well-trained drug-sniffing dogs were responsible for the seizure of more than 200 kg of Afghan-originated heroin at the Iranian city of Nourdouz in the East Azerbaijan Province, at the Iran-Armenia border.

UNODC, in cooperation with the Drug Control Headquarters and the Customs Administration of Iran, organized a visit earlier this year to the Iranian Customs K9 Centre for the Ambassador of Japan and Deputy Head of Mission of the Netherlands. During the visit, Alexander Fedulov, UNODC Country Representative in Iran, expressed his appreciation for the effective work of Iranian Customs in the fight against drug trafficking and highlighted the importance of drug detecting dogs as a useful tool in identifying hidden concealments.

The drug detecting dogs are responsible for a considerable amount of Iran's annual drug seizures. Mr. Fedulov expressed UNODC's appreciation for the generous donations from the Government of Japan which has supported the Iranian Government through capacity building activities planned and implemented by the UNODC Office in Teheran. He also expressed appreciation for the technical support received from the Dutch Embassy in Iran.

The visit was followed by a tour around the Centre to show the facilities and kennels which are designed and built with the highest international standards. Later, the K-9 teams demonstrated their capacities and learnings from the recent training course organized by UNODC in the Netherlands. The K-9 teams were able to identify hidden drugs in various situations including vehicles, cargos and luggage as well as drugs being carried by passengers in a setting that aimed to resemble a passengers' terminal.

During this event the Iranian Customs also received specialized dog food procured as part of the activities foreseen in the "Border Management and Illicit Trafficking" part of the UNODC Country Partnership Programme for Iran, which was generously donated from people of Japan for use of K-9 teams during the intense operation periods.

UNODC Field Office in the Islamic Republic of Iran