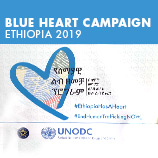 Addis Ababa (Ethiopia), 1 November 2019 - Thousands of committed men, women and youth gathered at the prestigious Millennium Hall in Addis Ababa on 24 October for the official launch of the Blue Heart Campaign against human trafficking in Ethiopia. The Campaign, an initiative of the United Nations Office on Drugs and Crime (UNODC), was launched in the context of Ethiopia's ongoing support on the issue of ending human trafficking.

This year's International Day against Trafficking in Persons on 30 July had the theme "Call your government to action". Ethiopia heard this call and stepped up. During a week-long series of events in the country, United Nations Deputy Secretary-General Amina J. Mohammed had earlier applauded the leadership of Ethiopia for being the first Sub-Saharan country to join 30 other countries in supporting the United Nations Blue Heart Campaign and recognised the importance of movements such as #EthiopiaHasAHeart.

Speaking at the launch on behalf of the Ministry of Foreign Affairs of Ethiopia, Ambassador Mahlet Hailu stated that, "We would like to appreciate the role being played by UNODC through its programs in Ethiopia including combating human trafficking. I would like to reaffirm that Ethiopia is committed to working in collaboration with UNODC and the international community in the fight against human trafficking."

Deputy Attorney General of Ethiopia, Gedion Timothewos, also addressed the audience and reaffirmed the national resolve to fight and to ultimately end this crime, saying that "We need to attack human trafficking with all of our might" and that the Campaign would help move Ethiopia's ongoing fight against human trafficking one step forward.

Those attending the launch event were treated to an excellent performance by the National Theatre, who through their creative talent, used drama and music to raise awareness on human trafficking and to encourage the audience to commit to the ethos of the Blue Heart Campaign.

Together with the people of Ethiopia, representatives from the United Nations, the diplomatic community, Civil Society, Art, Culture and Academic sectors committed to ending human trafficking by signing up to an 11-point pledge, showing commitment to combat human trafficking, support victims and spread the message that 'human beings are not for sale.'

Amado Phillip de Andrés, Regional Representative for Eastern Africa, speaking on behalf of UNODC, expressed gratitude to Ethiopia for its unwavering leadership and commitment in the fight against human trafficking.