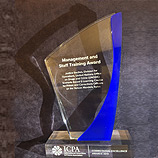 Buenos Aires (Argentina), 31 October 2019 - Yesterday, the United Nations Office on Drugs and Crime (UNODC) received a Correctional Excellence Award from the International Corrections and Prison Association (ICPA) for its long-standing efforts to promote the UN Standard Minimum Rules for the Treatment of Prisoners (the Nelson Mandela Rules). The award was presented during the ICPA's annual conference hosted by the Federal Prison Service of Argentina.

ICPA, a non-governmental organisation with Special Consultative Status with the Economic and Social Council of the United Nations (ECOSOC), is the only Global Corrections Community for prison practitioners from across the world. This year's annual conference in Buenos Aires attracted more than 400 practitioners from 85 countries around the topic of " Strengthening our Correctional Cornerstones: Rights, Dignity, Safety and Support".

ICPA's Correctional Excellence Awards recognize outstanding contributions to advancing humanitarian approaches in professional corrections. This year, the Board of Directors granted the Excellence Award in the category of prison management and staff training to UNODC's Justice Section for the development of its scenario-based e-learning course on the Nelson Mandela Rules. The training tool was presented during a plenary workshop of the ICPA conference, and equally features in the current edition of ICPA's Journal on Advancing Corrections.

On the occasion of the award, UNODC Executive Director Yury Fedotov emphasized that " prison reform efforts in line with the Nelson Mandela Rules are an essential part of UNODC's activities in the field of criminal justice. The Rules are fundamental to safeguarding the human rights and dignity of those behind bars and to the security, safety and the well-being of all people".

In a joint statement, the two Co-Chairs of the Vienna-based Group of Friends of the Nelson Mandela Rules, Ambassador Gerhard Küntzle (Germany) and Ambassador Rapulane Molekane (South Africa), congratulated UNODC on the award and said, " We are proud to have supported this innovative initiative of UNODC geared towards creating ownership of the Nelson Mandela Rules amongst prison officers. We shall ensure the course's wide dissemination within the Group of Friends and beyond in order to maximize its impact on the ground."  The Co-Chairs considered this all the more important as " serious prison challenges remain in countries worldwide, with grave consequences on prisoners, those in charge of their custody and societies at large."

UNODC developed the e-learning course recognizing that the buy-in of prison officers constitutes a major pre-condition for making the Nelson Mandela Rules a reality in prisons. Rather than being limited to theoretical content, the course features interactive videos - filmed in prisons in Algeria, Argentina and Switzerland - which expose the user to concrete prison management scenarios, and how to respond to these. Over 20 prison and corrections administrations as well as numerous international and non-governmental organizations were involved in the design and validation of the course's content.

Following its launch during the last session of the Commission on Crime Prevention and Criminal Justice in May 2019, UNODC's e-learning course on the Nelson Mandela Rules is now available in English, French, Spanish and Russian. It easily lends itself to being incorporated into national prison staff training curricula to reflect the minimum conditions of prison management which are accepted as suitable by the United Nations.

More broadly, UNODC has been strengthening its capacity to respond to the increasing number of requests from countries to provide guidance on legislative reform, prison staff training and good prison management practices. In 2018 alone, the Office trained more than 2,200 prison officers on the Nelson Mandela Rules and good prison management, including 500 women, and initiated rehabilitation and social reintegration programmes benefitting 900 prisoners. More than 70 countries worldwide benefitted from UNODC advisory services in the field of prison reform.