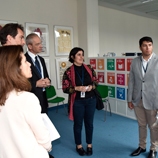 30 September 2019 - In June 2019 a team of seven journalists received the Breach-Valdez Prize for Journalism and Human Rights for their research on drug-related deaths in Mexico. Their investigative piece "The country of 2,000 graves" combines narrative journalism with sophisticated data visualization and revealed that almost two thousand clandestine graves, in which criminals disposed of their victims, were found in Mexico between 2006 and 2016.

The prize, which is awarded by the United Nations Office on Drugs and Crime (UNODC) jointly with several other organizations, included a trip for one member of the winning team to Paris, Geneva and Vienna to have an exchange with institutions interested in the defence of journalists and human rights.

In Vienna Ms Torres met with UNODC Heads of Divisions, including for Policy Analysis and Public Affairs and Operations, and with UNODC experts who focus on issues related to organized crime, justice reforms, corruption and terrorism, and research and trend analysis, including forensics.

The visit allowed for awareness raising and reflection on the global issues of "Disappeared people" and "Violence against Journalists". It also showed how UNODC's mandate and future programmes can support both capacity building for investigative journalism and protection of journalists, as a vulnerable segment of victims of organized crime, as well as support for access to justice of missing people and their families, also in partnership with other stakeholders.

Ms Torres also met with the Mexican Permanent Representative to the UN in Vienna and the Director of the UN Information Service Vienna.

In summarizing her visit, Ms Torres said: "This trip has been important to share the work we did with this research, as well as to learn about other sources of information that can help us to continue covering, from other approaches, the emergency of the disappearance of people in Mexico."

She also said that "it is important to give visibility to the risks and challenges that journalists face in Mexico, to name the impunity that has prevailed in the investigations on violence against our colleagues, and also talk about the strength that collective and collaborative work has given us to continue doing journalism, despite the adversities we face on a daily basis."

The Breach-Valdez Prize for Journalism and Human Rights was first awarded in 2018 and emerged as a tribute to the renowned journalists Miroslava Breach and Javier Valdez, killed in 2017, whose names have become a symbol of the urgency to protect media professionals and allow them to do their work independently. The Breach-Valdez award recognizes the careers of journalists who stand out for their work on human rights issues in Mexico and who risk their lives daily to play their role in keeping society truthfully informed.