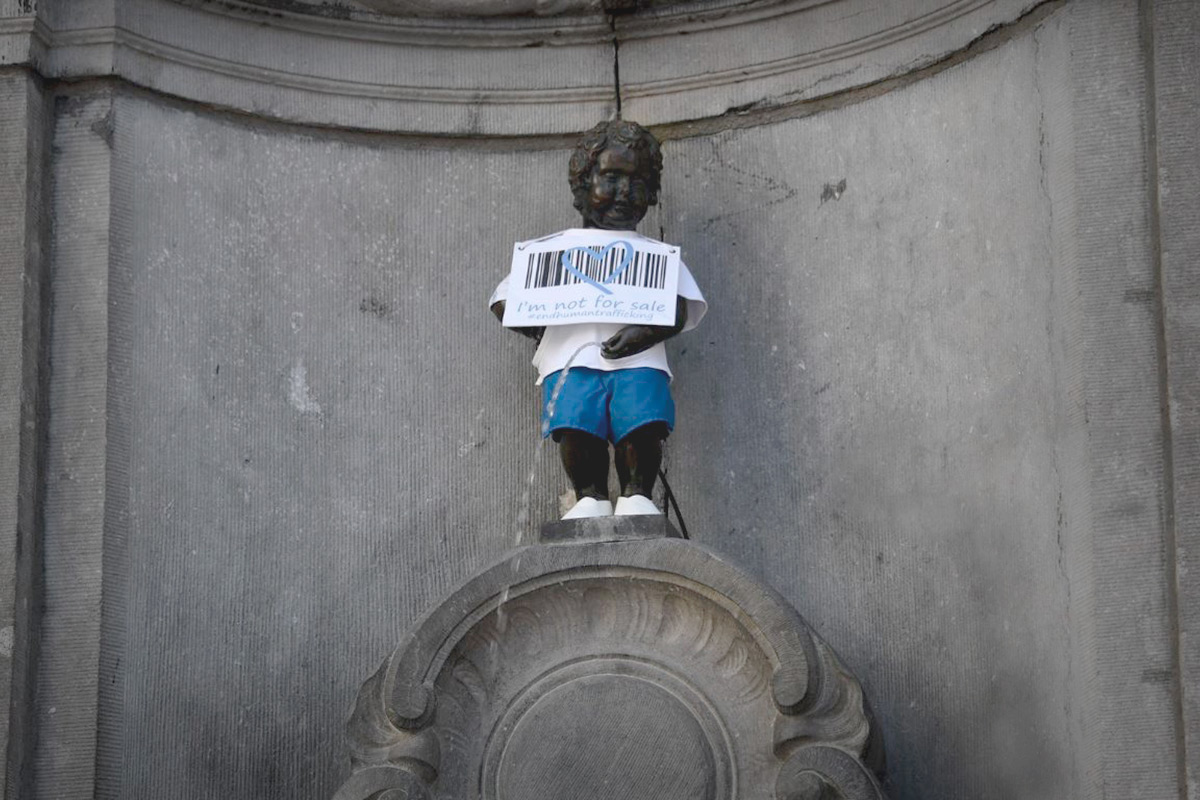 Brussels (Belgium), 7 August 2020 - On World Day Against Trafficking in Persons on 30 July, the United Nations Office on Drugs and Crime (UNODC) and its partners across Belgium came together to raise awareness about the fight against human trafficking and to pay homage to the work of first responders to human trafficking.

Celebrating the 10th anniversary of the UNODC-led Blue Heart Campaign against Trafficking in Persons, this year’s theme, “Committed to the Cause - Working on the Frontline to End Human Trafficking”, highlights the fundamental role of the first responders to human trafficking. These are the people who work in different sectors - identifying, supporting, counselling and seeking justice for victims of trafficking, and challenging the impunity of the traffickers.

As highlighted by the Belgian Minister of Justice, Koen Geens, “Rebuilding the victims' self-esteem is essential in order to bring them justice and punish the perpetrators”. The statements of Minister Geens are available in French and in Dutch. With the ongoing COVID-19 crisis, the essential role of first responders has become even more critical. Nevertheless, their contribution is often overlooked and unrecognized.

Belgium has long been in the frontlines in the battle against trafficking in human beings. By leading global efforts through the UN Voluntary Trust Funds for Victims of Human Trafficking, Belgium supports the provision of much needed financial, humanitarian and legal assistance directly to victims in Countries of origin, transit and destination.

Through its participation in the Blue Heart Campaign, Belgium joins Countries around the world to send a clear message calling for strong solidarity with the victims of human trafficking. Given its transnational implications for human security and international stability, "Trafficking in persons is a global threat that requires a global response" said the Belgian Minister of Foreign Affairs and of Defence, Philippe Goffin. The statement of the Minister Goffin is available here.

As part of the celebrations for World Day, the key figure of Brussels folklore, Manneken-Pis, received from UNODC its 1047th costume, inspired by the Blue Heart Campaign. The costume was unveiled to the general public in the presence of the Order des Amis de Manneken-Pis, UNODC's friends and partners - united in the fight against human trafficking. This included the Belgian Government represented by the Ministries of Justice and Foreign Affairs, the specialized shelters for victims PAG-ASA and Payoke, the Samila Foundation, the Smurfs, and many more.

As outlined by UNODC Director, Division for Policy Analysis and Public Affairs, Jean-Luc Lemahieu, “Manneken-Pis’ support to the global fight against human trafficking is iconic and sends a powerful message. Not only does it show the commitment of the City of Brussels to joint efforts against this heinous crime, but also highlights the fundamental need to protect children, being the most vulnerable victims around the world”.

With the intention of sending a powerful message of hope and solidarity, the UNODC costume incorporates a barcode and the words “I am not for sale” to spotlight the fate of people, trapped in a net of violence, abuse and exploitation by inhumane traffickers who should never be allowed to reap immense profits from pain, misery and suffering.

"The insolence of Manneken-Pis is that of a free child in a free city that does not tolerate oppression. The new "Blue Heart" suit has its place in our little fellow's wardrobe. We are particularly pleased to involve the city of Brussels, of which it is the symbol, in the fight against all forms of trafficking and exploitation of human beings" underlined the Mayor of the City of Brussels, Philippe Close.

The costume aims to bring visibility to the plight of trafficking victims and give a voice to those who have been unable to tell their stories of this hidden crime. During the handover ceremony of the costume hosted by Brussels City Hall, the Representative of the UNODC Brussels Liaison Office, Yatta Dakowah, echoed “As part of the rich, historical and cultural heritage of the Mannekin-Pis wardrobe, we hope that in the years to come, on 30 July this costume will remind the nation that the horror of human trafficking must end and be forever abolished.”

During the day, shadows of the victims covered the Carrefour de l'Europe in Brussels. With this initiative, PAG-ASA (the Brussels-based specialised shelter for victims of trafficking), in coordination with UNODC, wanted to symbolically reveal the presence of thousands of victims exploited in Belgium.

A QR-code allowed to watch the stories of the victims behind the shadows. PAG-ASA employees and volunteers alerted passers-by to raise their awareness about the proximity and ordinariness of the crime.  “Each year we support more than 200 victims in their recovery process, but today we are here especially for all the invisible victims who remain in the shadow. We hope to open people’s eyes to see the victims and call us for support” said the Director of PAG-ASA, Sarah De Hovre.

At sunset, the Cities of Brussels, Bruges and Ghent lighted their town halls and other iconic buildings in blue, featuring a blue heart, to encourage governments, civil society, the private sector and individuals alike to take action. The blue colour refers to the Blue Heart, the international symbol against human trafficking, representing the sadness of those who are trafficked while reminding us of the cold-heartedness of those who buy and sell fellow human beings.

To further support the victims of human trafficking and to mark this year’s World Day, the UN Voluntary Trust Fund for Victims of Human Trafficking, managed by UNODC, together with the Rukus Avenue Music Group, aired a “live virtual concert” with the “Artists UNited against Trafficking in Persons”. Hosted by UNODC Goodwill Ambassador and actress Mira Sorvino, the concert was an opportunity to raise funds and donations for the United Nations Voluntary Trust Fund for Victims of Trafficking in Persons, which provides vital assistance and protection to the victims of trafficking through specialized organizations across the globe.

The Belgian UNODC Goodwill Ambassador, Ozark Henry, participated in the concert and stressed “I am particularly attached to the World Day against Trafficking in Persons and the Blue Heart that I am wearing. Both are occasions to remind people of the conditions of victims of human trafficking.” Statement of Ozark Henry here.

The Smurfs also contributed to raising awareness about the World Day and the concert through the creation of tailored-made illustrations to support the cause.