63rd session of the Commission on Narcotic Drugs starts on Monday 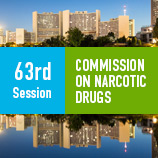 Vienna, 28 February - The 63rd session of the Commission on Narcotic Drugs (CND) will be held from 2 to 6 March in Vienna, Austria. The CND is a functional commission of the United Nations Economic and Social Council (ECOSOC) and is the central drug policy-making body within the United Nations system. It monitors the world drug situation, develops strategies on international drug control and recommends measures to address the world drug problem.

The opening session will be addressed by Ghada Waly, Executive Director of the UN Office on Drugs and Crime (UNODC), Cornelis de Joncheere, President of the International Narcotics Control Board (INCB) and Tedros Adhanom Ghebreyesus, Director-General of the World Health Organization (WHO) (tbc) followed by statements by representatives of the regional groups.

Resolutions under consideration by the Commission address topics including strengthening partnerships with the private sector and improving the collection and analysis of data to strengthen evidence-based responses to the world drug problem; involving youth in drug prevention efforts and ensuring the access to and availability of controlled substances for medical and scientific purposes as well as promoting alternative development approaches to illegal crop cultivation. The whole list of draft resolutions can be found here.

The 63rd Session is expected to bring together around 2,000 participants from Member States, parliaments, inter-governmental organizations, civil society, and the scientific community.

More than 100 side events will take place during the 63rd session of the CND on topics ranging from generation equality to prevention, treatment and care of people with drug use disorders involving communities and families; countering synthetic drug threats; the fight against drug trafficking; alternative development for sustainable livelihoods; research and data on drug supply and trafficking and youth participation in drug use prevention. The full list of side events is available here.