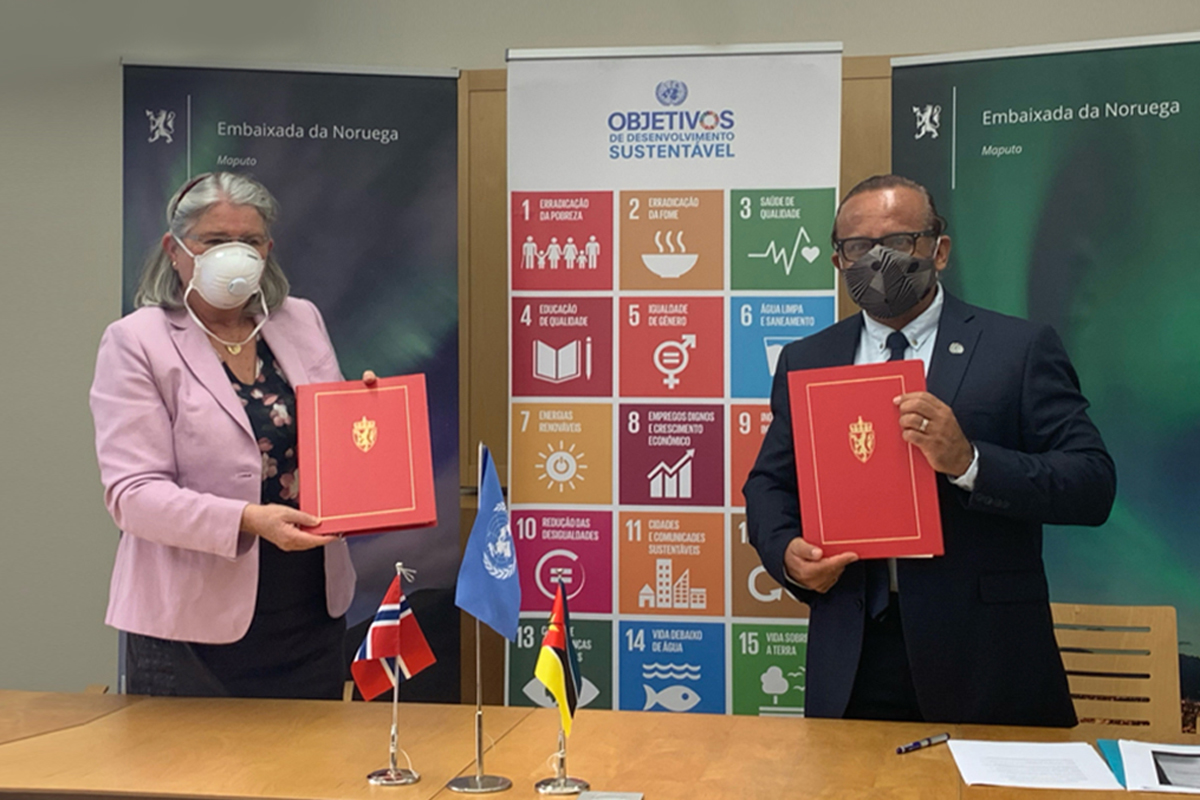 Maputo (Mozambique) - The Government of Norway and the United Nations Office on Drugs and Crime (UNODC) signed an agreement on 11 June on Norway's contribution of NOK 17,000,000 (USD 1.7 million) for over a period of three years. This funding will support sustainable presence of the UNODC in Mozambique and the implementation of the “Maputo Roadmap” especially in the areas of terrorism prevention and the fight against corruption.

The agreement was signed by the UNODC Country Representative, Cesar Guedes, and the Ambassador of Norway, Aud Marit Wiig. The event was also attended through videoconference by Miwa Kato, Director of the Division for Operations, Masood Karimipour, Chief of the Terrorism Prevention Branch of the Division for Treaty Affairs, and Zhuldyz Akisheva, UNODC Regional Representative for Southern Africa.

According to Ambassador Wiig, the Norwegians were “happy to collaborate with the establishment of the UNODC in Mozambique and recognized the important contribution the organization can provide through its technical capacity and expertise to the country”.

Mr. Guedes stated that “Norway has always been an important partner of both the UN and the Mozambican Government, and this support shows its deep knowledge and sensibility towards the Mozambican needs”.

Mozambique has been facing major challenges in recent years, such as the escalation of the conflict in Cabo Delgado, the intensification of illicit trafficking through the Mozambique Channel, the humanitarian consequences of the 2019 Tropical Cyclones Idai and Kenneth and, more recently, the pandemic of COVID-19.

The partnership is also fundamental for the entire Southern African Region to respond and mitigate the impact of these crimes and ensure the country's sustainable development for both current and future generations.

As highlighted by Ms. Akisheva, “all support given to Mozambique may impact positively the entire region, due to its strategic position and strong influence in Southern Africa”.

The agreement is the first directly signed by the UNODC in Mozambique, since the opening of its office in the country a year ago. According to Mr. Karimipour, “the Norwegian support opens a virtuous movement towards the valorization of the UNODC work in the country, and stimulates other positive synergies”.

The signing of the agreement comes shortly after the Government of Mozambique officially approved the “Maputo Roadmap” of UNODC engagement in the country for the years to come.

The Roadmap focuses on specific areas of policy development and technical assistance related to the priorities of the Government of Mozambique in strengthening its criminal justice system, which are in line with the priorities set by the Southern African Development Community (SADC) and the UN Sustainable Development Goals.