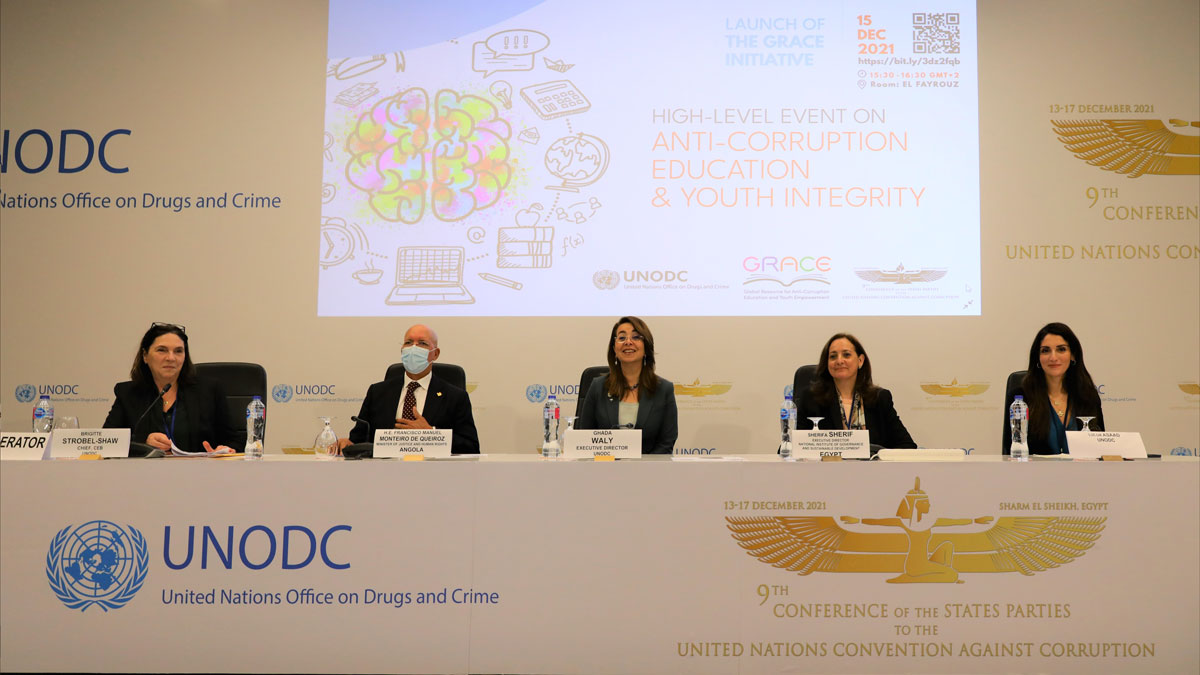 15 December 2021 – Children and youth can be drivers of positive changes in attitudes and behaviour, and around the world young people are playing a crucial role in developing and implementing innovative, creative anti-corruption efforts. But to nurture this and effectively promote a culture of integrity and build a generation that stands for resilience to corruption, education is key.

To pursue this, UNODC’s new anti-corruption education and youth integrity initiative was launched today at a special high-level event held on the margins of this week’s Conference of the States Parties to the United Nations Convention against Corruption.

The Global Resource for Anti-Corruption Education and Youth Empowerment – or GRACE – promotes a holistic approach to empowering the next generation to act with integrity and be less tolerant of corruption and unethical practices. It is a major step in UNODC’s work in engaging young people to be active problem-solvers in tackling corruption.

“Education truly gives people a sense of civic responsibility and the belief that they can make a difference. Whether we are talking about climate change, preventing radicalization to violent extremism, or fighting corruption, our societies need to find more effective ways of reaching out and engaging youth,” noted UNODC Executive Director, Ghada Waly, who was joined at the special event by Angola’s Minister of Justice and Human Rights, H.E. Monteiro De Queiroz; the Russian Federation’s Ambassador-at-Large for International Anti-corruption Cooperation, H.E. Andrey Avetisyan; and Executive Director of Egypt’s National Institute of Governance and Sustainable Development, Sherifa Sherif.

GRACE builds on UNODC’s earlier projects, Education for Justice (E4J), which sought to prevent crime and promote a culture of lawfulness through education activities designed for primary, secondary, and tertiary levels and the Anti-Corruption Academic (ACAD) initiative. By harnessing the successes seen under these, GRACE expands UNODC’s anti-corruption education, targeting three specific areas: Primary and Secondary Education; Academia and Research; and Youth Empowerment. To ensure a multi-sectoral approach in all its efforts, GRACE will work together with a broad grouping, including children, youth, educators, academia, and other relevant stakeholders.

In this vein, the formation of a new youth advisory board to enable young people to provide their perspectives and insights on tackling corruption was also announced. The “YouthLED” Integrity Advisory Board, for which applications are now open, will bring together a group of 16 talented young people, working to advance education and youth empowerment as a key tool to prevent and fight corruption nationally, regionally and globally.

YouthLED will support GRACE in advancing its four cross-cutting principles – partnerships, innovation, gender, and youth – by engaging with young people in their respective countries and regions, as well as globally; advocating for the GRACE initiative within their communities to disseminate good practices and experiences of anti-corruption education; and provide training and learning opportunities on GRACE tools and resources.

Young people can help to promote integrity and be powerful agents of change by developing innovative and impactful solutions within their communities, with support from decision makers. Indeed, it is in the interests of decision-makers to harness young people’s energy, ideas, and power of mobilization.

“In a society where families educate their members to respect public resources and the State assets…where schools include material on anti-corruption in their curricula…in an educational system with these factors, all organized and working together, the performance of law and justice enforcers will certainly be more impartial and less susceptible to being affected by corruption and bad practices,” reflected Minister De Queiroz.

As a tangible example of how young people can offer innovative solutions, the event also unveiled the national winners of UNODC’s Coding4Integrity African Youth Anti-Corruption Hackathon. An illustration of the kind of outreach that GRACE is able to conduct, the hackathon was a month-long coding competition involving youth from Egypt, Kenya, Nigeria, Senegal, and South Africa. Designed to harness the interest, talent, and skills of young people to provide innovative technology solutions to curb corruption, the hackathon – Coding4Integrity – is one of the ways UNODC is actively working to promote the development of sustainable ICT-based anti-corruption solutions and, ultimately, to advance the implementation of the United Nations Convention against Corruption.

Over 1,900 developers from the five African countries applied to take part in the hackathon and after an extensive evaluation process, 200 final participants were chosen and divided into 65 teams. Ultimately, one winning team per country was chosen, with ICT solutions being developed around a series of thematic areas, including transparency in public administration; transparency in public procurement and the administration of public finances; safe and reliable reporting of corruption; and financial investigations.

The winners of the Coding4Integrity Hackathon are Team Valoro (Egypt); Team Enigma (Kenya); Team STEM (Nigeria); Team Fisk (Senegal); and Team Blockchain Bulls (South Africa). Their thoughts around corruption, and how they see hackathons playing a role in this, can be viewed here.

“The hackathon was wonderful,” commented Mamadou Sow, one of the members of Senegal’s Team Fisk. “We learned a lot of things about corruption and its consequences on society. As young computer science students, it allows us to use IT to fight against corruption.” Out of those selected to take part in the hackathon, more than a quarter were female, ensuring both that the solutions being generated were gender-inclusive, and that the gender gap within the ICT space – like with other industries and professions – were being addressed. Joy Kareko from Team Enigma in Kenya reflected on this at the event: “As a female working in Artificial Intelligence, it was very exciting to come up with an innovative solution to fight corruption.”

Promoting quality education and meaningful youth engagement has become increasingly important to creating new pathways for positive change and innovation. The Sustainable Development Goals – including Goal 16 on peace and justice – cannot be effectively achieved without educating a new generation that is guided by the principles and values of ethics and integrity.

In this year of anti-corruption, this was also expressed in the June 2021 UN General Assembly special session against corruption. In the Political Declaration which was adopted, anti-corruption education and training was highlighted as being at the heart of a holistic and multidisciplinary approach to promoting transparency, accountability, and integrity, and to creating a culture that rejects corruption.

The way society views, and addresses, corruption can be revolutionized if young people are involved in the planning, design and implementation of anti-corruption frameworks, tools, and policies at the national and international levels. There is much to be gained from engaging young people in the fight against corruption and intergenerational collaboration is fundamental to achieving solidarity, transparency, accountability, and trust among States, people, and generations as we aim to end corruption.