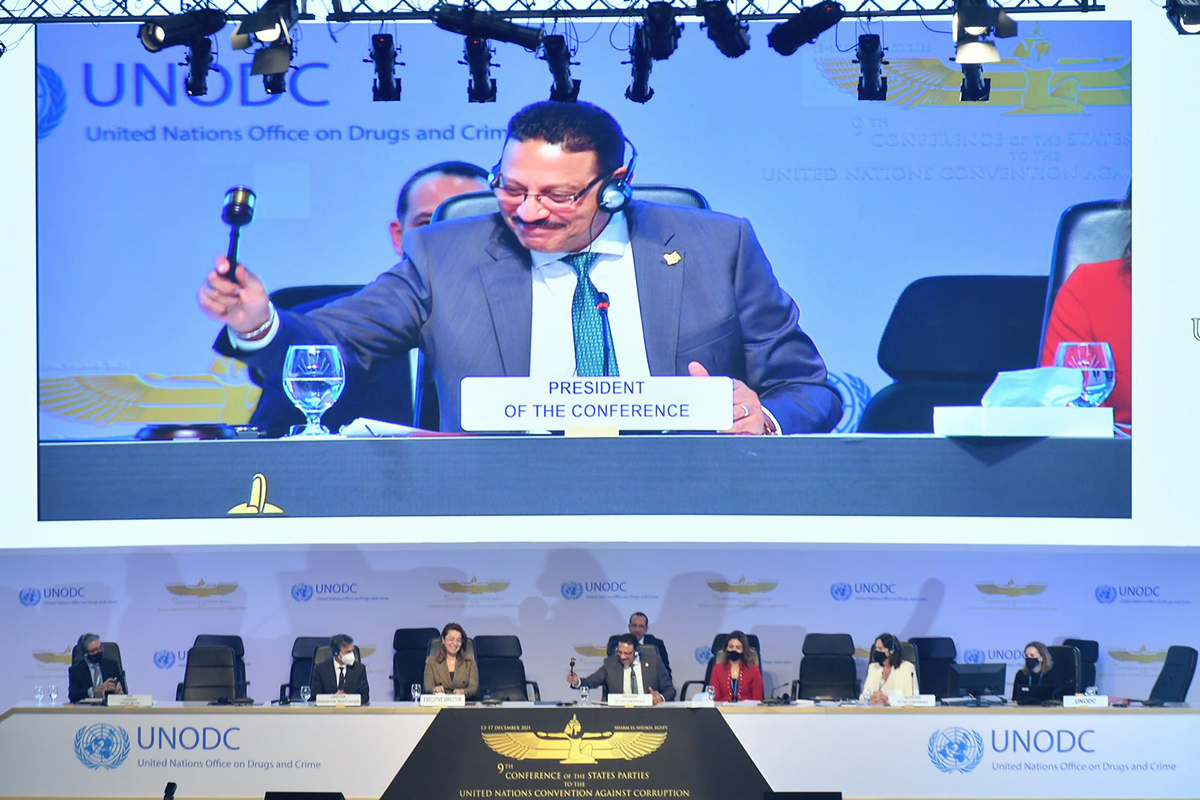 Sharm el-Sheikh (Egypt), 17 December 2021 - The ninth session of the Conference of the States Parties the United Nations Convention against Corruption (UNCAC) concluded today with the adoption of the Sharm El-Sheikh Declaration as well as seven other resolutions and an agreement on the host country for the tenth session of the world’s anti-corruption conference.

The Sharm el-Sheikh Declaration, underscoring the increased risks of corruption presented by urgent economic and health relief spending, calls for States parties to collect best practices and challenges, with the aim of developing guidelines to strengthen cooperation to prevent, identify, investigate and prosecute corruption during times of emergencies and crisis response and recovery.

“The Sharm el-Sheikh Declaration on fighting corruption in times of crisis will inform our recovery from the pandemic with integrity, and will help countries be ready for the emergencies of tomorrow,” said the Executive Director of the UN Office on Drugs and Crime, Ghada Waly, in her closing remarks. “As 2021 with all its challenges comes to an end, with many important anti-corruption commitments made during this landmark year, let us agree that 2022 will be the year of action. Let us keep our promises to people and youth, letting no one down, and leaving no one behind.”

The work to develop the guidelines will be taken forward by the open-ended intergovernmental expert meeting to enhance international cooperation under the Convention.

Other resolutions adopted at the session address key issues such as beneficial ownership in asset recovery, regional and international cooperation, and education and youth empowerment, as well as advancing commitments made at previous sessions to enhance prevention, and to strengthen cooperation between supreme audit institutions and anti-corruption authorities. A resolution to follow up on the political declaration from the first-ever UN General Assembly Special Session against corruption in June was also adopted.

In addition, States parties agreed a decision for the United States to host the tenth session of the conference in 2023.

Some 2,133 participants from governments, regional and intergovernmental organizations, civil society, academia, and the private sector from more than 150 countries signed up to take part in person and virtually in the week-long ninth session in Sharm El-Sheikh.

More than 70 side events were organized on the margins of the session, featuring panels on issues of corruption and gender, healthcare, COVID, sports, education and youth. The five winning teams of UNODC’s Coding4Integrity hackathon from Egypt, Kenya, Nigeria, Senegal and South Africa were also presented at the session.

The UN Convention against Corruption is the sole global, legally-binding instrument against this crime. It came into force in December 2005 and is near-universal with 189 Parties. Under the Convention, States are legally obliged to prevent and criminalize corruption; to promote international cooperation; to recover and return stolen assets; and to improve technical assistance and information exchange in both the private and public sectors.

UNODC serves as guardian to the Convention and provides anti-corruption assistance to 116 countries through its Global Programme against Corruption and field presence. At the 9th session, UNODC is hosting a number of side events, and will present publications on tackling corruption in sport, whistle-blower protection in the health sector, addressing the gender dimensions of corruption and addressing corruption challenges in the COVID-19 response and recovery.