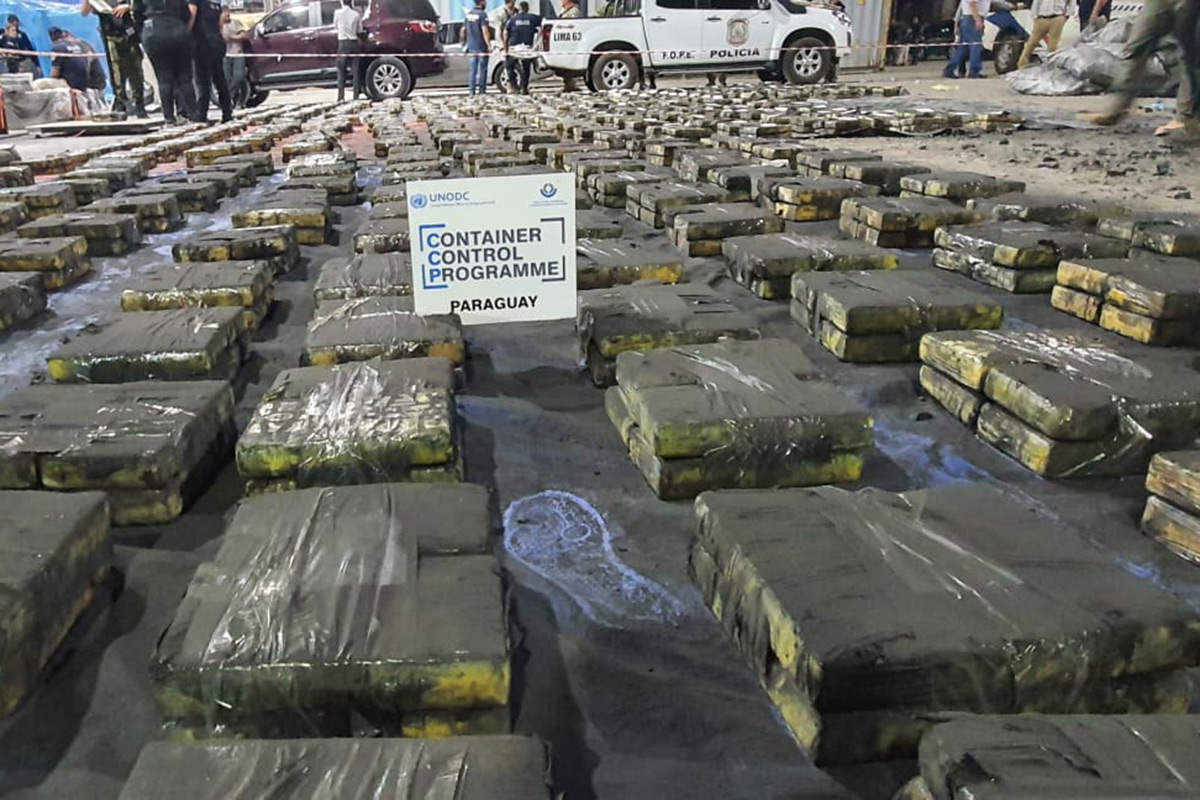 Vienna (Austria), 26 February 2021 — Despite numerous obstacles due to the ongoing global COVID-19 health crisis, the UNODC-World Customs Organization Container Control Programme (CCP) seized more than 100 metric tons of cocaine in the course of 2020.

As a result of the concerted efforts of the Programme’s over 120 Port Control Units (PCUs) and Air Cargo Control Units (ACCUs) operating in strategic locations around the globe, the figure marks an unprecedented record. Leading the seizures were Colombia with 32 tons, Ecuador with 23.5 tons, and Brazil with 16 tons, all of which were destined for European and Asian markets. Of similar importance were cocaine seizures in Central America, which involved various uncovered operations and shipments to North America.

Also, last December, 16,000 liters of chemical precursors were seized in Bolivia. The shipment came from Chile, disguised as a trademarked motor oil consignment containing acetone; a raw material for the production of cocaine and for the manufacture of explosives.

At the same time, anti-narcotics units in Paraguay reported their largest cocaine seizure in history, when authorities in coordination with the Port Control Unit seized a drug shipment, hidden in several containers moving a cargo of biochar (biomass charcoal). The cargo of around 2,300 kilograms, was destined for Israel and the Middle East, with previous maritime transit through ports in Argentina and Belgium.

Principal ports, in which CCP operates, most regularly used for the transshipment of narcotics and illicit substances from Latin America include Santos (Brazil), Buenaventura and Cartagena (Colombia) and Guayaquil and Bolívar (Ecuador).

As a result of joint efforts involving a variety of law enforcement agencies such as customs, police authorities, anti-narcotics agents, port authorities and border protection officials, as well as staff and managers at designated Port Control Units and Air Cargo Control Units, the recent seizures reveal new modalities in the trafficking of illegal substances through containers, especially in relation to route diversification and the diversion of cargo from third countries to their final destinations.

UNODC and the WCO praise the commitment, dedication and efficiency of all those involved in achieving this important milestone, and invite both origin and destination countries to maintain and reinforce controls and strict oversight of illicit shipments.

The milestones described above represent only one of various success stories presently published as part of the global launch of CCP’s 2020 Annual Report; a valuable public information tool that illustrates this and other outstanding achievements of the Programme in the implementation of its regular schedule, in a year notably characterized by operational restrictions at all levels.

“Faced with logistical and operational limitations derived from COVID-19, on the one hand, and in the wake of new forms of organized crime, which continue to resort to the containerized trade supply chain in various ways to sustain their criminal activities, on the other, progress by the CCP was still measurable and significant,” notes this year’s report preamble.