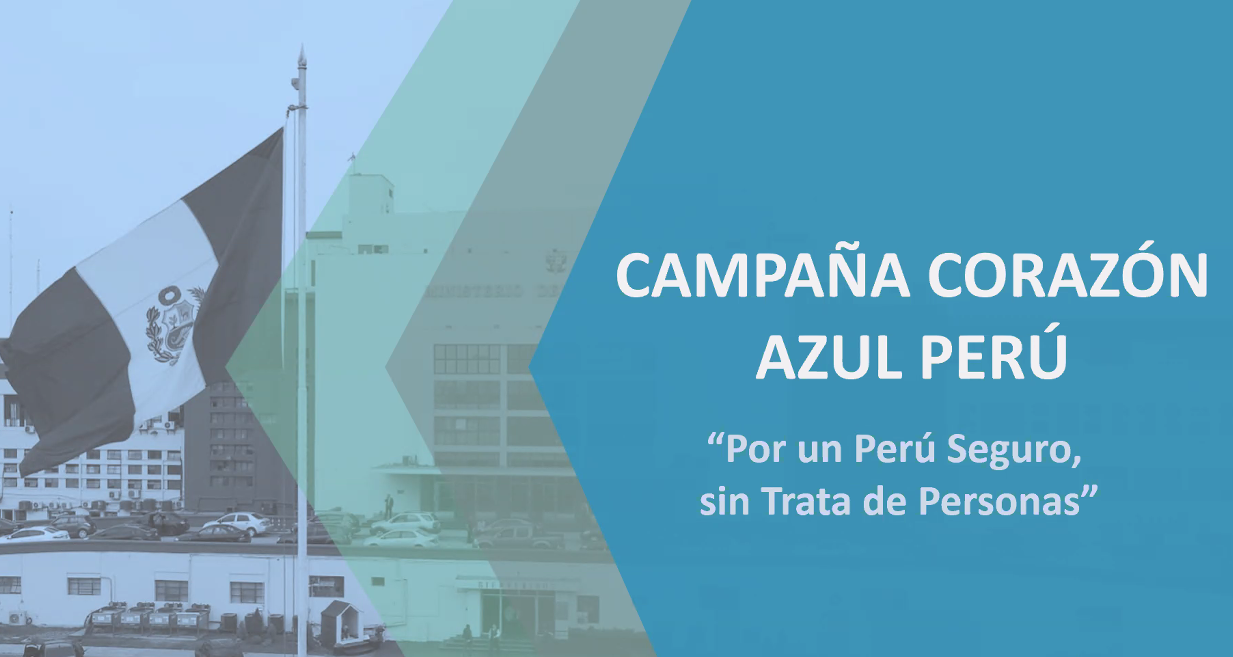 Lima, July 19, 2021 - The United Nations Office on Drugs and Crime (UNODC) participated in the inauguration ceremony of the Blue Heart Campaign 2021 by the Ministry of the Interior of Peru and the Permanent Multisectoral Commission against Trafficking in Persons and Smuggling of Migrants.

Before a virtual audience of more than 80 people, the Director General of Democratic Security of the Ministry of Interior, Silvia Mori, thanked the presence of UNODC and other agencies that have strengthened the state response to crimes such as human trafficking."The State, through the ministries involved, works to promote measures necessary to prosecute and capture traffickers", she said.

The Blue Heart campaign was created by UNODC in March 2008 as a movement that seeks to raise awareness of human trafficking and its impact on society, constituting an effective means to demonstrate the coordinated and integrated efforts of the States Parties to the Protocol of the Palermo Convention against this crime. "The Blue Heart, as a symbol, calls us to respond to the suffering of the victims and to reject all forms of human trafficking and criminal acts of those who exploit  human beings," said Gilberto Zuleta, UNODC Regional Officer for the Global Programme against Trafficking in Persons.

A situational report on the crime of trafficking in persons in the context of mixed migratory flows in Peru 2020 conducted by this office showed that 87% of the victims assisted between 2019 and 2020 are women and girls, the highest incidence of cases lies in sexual exploitation in 73.4% of cases, leaving in second place trafficking for labor exploitation with 18.6%. In addition, the COVID-19 pandemic aggravated the migration conditions, where the population from Venezuela faces challenges for their socio-economic integration, which has increased their level of vulnerability to human trafficking.

"At UNODC, our mandate is to cooperate with States and civil society in the fight against this crime through the design and implementation of comprehensive strategies based on evidence and aimed, above all, at strengthening the criminal justice response, through cooperation tools and mechanisms," said Mr. Zuleta while inviting those present to make a Blue Heart visible on July 30.

Javier Ruiz-Eldredge, head of the Directorate of Fundamental Rights of the Ministry of the Interior, highlighted the importance of the promulgation of the national policy, soon to be published, on trafficking in persons and its trends in the regions. The event was connected to the macro-regional meeting against human trafficking aimed at regional governments, police officers, justice operators and services with competence in the matter in the regions of Apurimac, Ayacucho, Ica, Junin and Pasco.

The theme of the campaign for this International Day against Trafficking in Persons is: "Victims' Voices Lead the Way", which seeks to put the victims of trafficking at the center, highlighting the importance of listening and learning from the survivors. Learning from their experiences and turning their suggestions into concrete actions will lead to a more victim-centered and  effective approach in fighting  human trafficking.