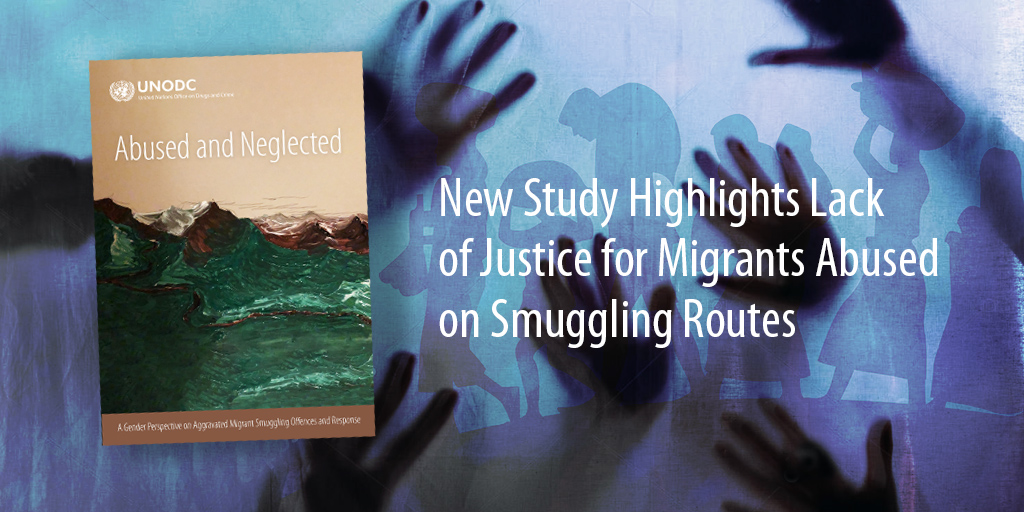 VIENNA, 28 June 2021 - Migrants who use smuggling networks to flee their home countries are often subjected to extreme violence, torture, rape and kidnapping while in transit or captivity.

Despite the severity of these offences, little action is taken by national authorities and, in some cases, officials are complicit in these crimes.

These are among the main findings of a study released today by the United Nations Office on Drugs and Crime  (UNODC) that centres on transit routes in West and North Africa, the Mediterranean Sea and Central America.

The study, Abused and Neglected - A Gender Perspective on Aggravated Migrant Smuggling and Response, also focuses on the differing types of violence inflicted on men and women and presents the underlying factors and motivations that lead to abuse during smuggling operations.

“Our research showed that violence is used by the smugglers or other perpetrators as a form of punishment, intimidation or coercion, and often inflicted with no apparent reason,” says Morgane Nicot, who coordinated the development of the study.

“We found that male migrants are primarily subjected to forced labour and physical violence while women are more exposed to sexual violence, leading to unwanted pregnancies and abortions. All genders can suffer from inhuman and degrading treatment,” she adds.

Migrant smuggling is a profitable criminal activity that involves the arrangement of illicit border crossings against payment for people who are desperate to leave their home countries but have no legal means to migrate.

These people may be escaping natural disaster, conflict or persecution or seeking employment, education and family reunion opportunities.

Although the tragic fates of the thousands of smuggled migrants who every year die at sea, perish in deserts or suffocate in containers are documented, there is little information available on why acts of violence and abuse are inflicted on migrants, what impact this has on them, and how this is handled by the authorities.

“This is why we decided to conduct such necessary research. Our study also analyses how law enforcement officials respond to cases of aggravated smuggling and highlights how challenging it is to prosecute such crimes,” says Ms. Nicot.

Extensive interviews with smuggled migrants and feedback from UNODC partners who work directly with abused migrants confirm that the use of violence is widespread on certain smuggling routes.

However, there is little evidence that such crimes lead to investigations or legal proceedings, especially in the transit countries where the offences are committed.

Some migrants are reluctant to report abuse because they could be treated as criminals, either due to their irregular status or for having an abortion, sex outside of marriage or with members of the same sex, acts which are punishable in some countries.

“Migrants also don’t come forward because a significant portion of the abuses stem from public officials who may also be involved in the actual migrant smuggling operation," says Morgane Nicot.

"These officials include border guards, police officers and staff who work in detention centres,” she adds.

The study provides guidance for criminal justice professionals on how to investigate and prosecute cases of violence and abuse during migrant smuggling operations while taking into consideration the gender-related needs and vulnerabilities of the migrant involved.

It also lists a series of recommendations for UN Member States on ways to respond to aggravated smuggling, protect and assist the migrants and secure more convictions for cases of these crimes.