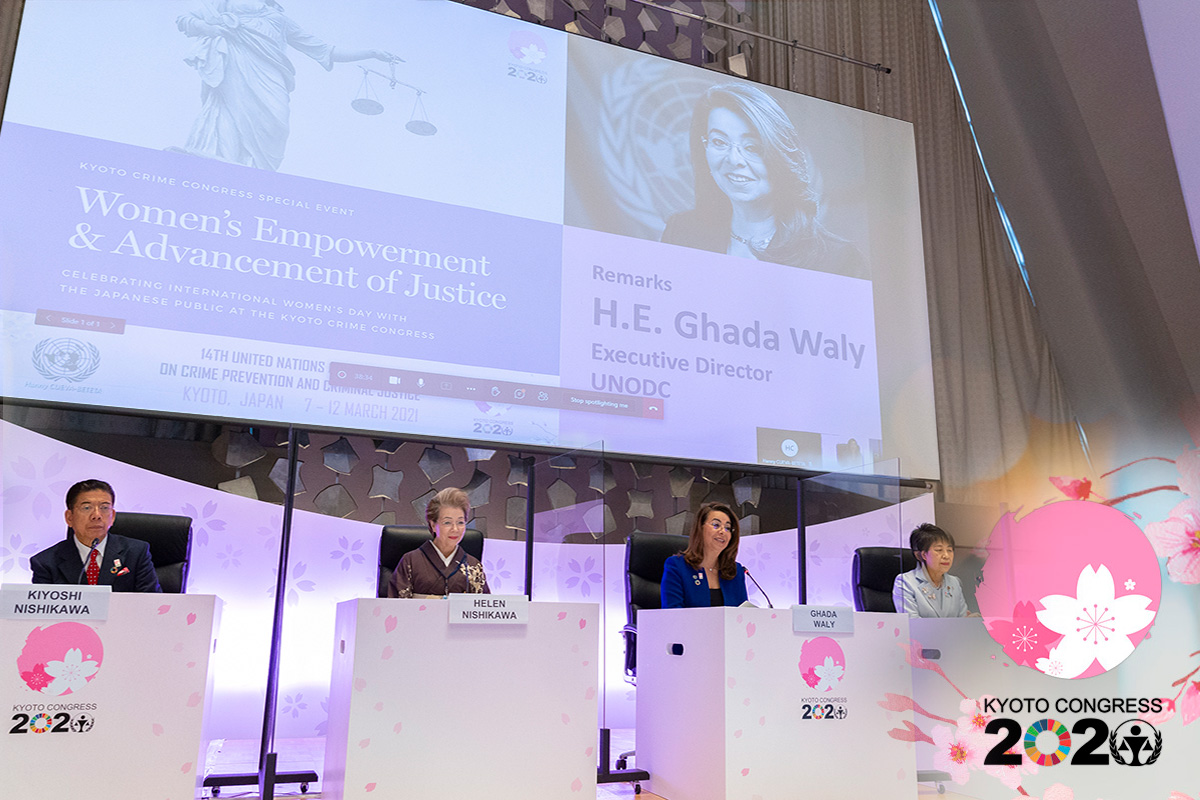 KYOTO/VIENNA, 8 March 2021 – On International Women’s Day, the Kyoto Crime Congress started off with a special event on women’s empowerment and the advancement of justice. Speaking at the event, Ms. Waly voiced her strong support to the next generations of women leaders in justice, “You belong at the top, and your contributions are essential. If you believe in yourselves and stand up for each other, there is no limit to what you can achieve for justice.”

The Minister of Justice of Japan, Yoko Kamikawa, opened the event and commended the Kyoto Declaration, as it “calls for further mainstreaming of gender perspectives in crime prevention and criminal justice.” She also emphasized the need to redouble our efforts. “The digital innovation and remote working accelerated by the pandemic created more opportunities, especially for women, while they have also been disproportionately affected, socially and economically. Now is the time to take further action to promote women’s empowerment and to strengthen the rule of law”, she said.

“The Government of Japan has been working in cooperation with UNODC based on a concept of ‘human security’ in which all life and dignity should be respected”, said Takashi Uto, State Minister for Foreign Affairs of Japan. He also stressed the urgent need for women’s empowerment in the current context of the pandemic, but also said “Humankind can turn this crisis to an opportunity for improvement” to build a society where “no one is left behind.”

“The impact of the [current COVID-19] crisis on women’s rights, education, and employment will be felt for years to come,” Ms. Waly underscored. Law enforcement and judiciary institutions, she said, “Need to be pillars of a gender-sensitive COVID response and recovery and invest in women’s advancement and women leaders for the benefit of justice across all of society.”

Anita Bhatia, the Deputy Executive Director of UN Women also looked at the recovery after COVID-19 and said “There is a need to create demand for a new generation of justice sector strategies which fully reflect the implications of the pandemic on justice reform and justice recovery.”

Mr. Kiyoshi and Ms. Helen Nishikawa, a Japanese celebrity couple, also shared their perspectives on marginalization and hardship causing crime and harm. Together, they have sought to bring positive messaging to prisons and welfare facilities throughout Japan for over 50 years. “We sincerely believe that small steps of reaching out and support resocialization can bring happiness and achieve a society where no one is left behind.”

The session ended with a panel discussion sharing insights of initiatives aimed at promoting empowerment and social justice, including by Parliamentary Vice Minister of Defense of Japan Rui Matsukawa, President of Sophia University Yoshiaki Terumichi, CEO of Accept International Yosuke Nagai and UNODC Operations Division Director Miwa Kato. The panel agreed that it was essential to create an enabling environment that promotes inclusion and tolerance. In this sense, promoting women’s participation in decision making is key, which will in turn result in the promotion of social justice and will lead to more effective solutions to crime and harm.

In closing the panel, Ms. Kato concluded that “to prevent crime, harm and reoffending, it is essential to create a tolerant society that leaves no one behind, factoring in people suffering from poverty, abuse, unemployment and other hardships, where we all help each other in an enabling environment.”

The international community is increasingly recognizing how women and men are differently affected by and involved in terrorism. At an event looking at how criminal justice systems can effectively integrate a gender dimension into their response to terrorism and violent extremism, participants discussed the critical role women are playing in long term peace as part of the Women, Peace and Security agenda.

“Empowering women and supporting their rights and their voices can unleash a powerful force against terrorism and violent extremism,” Ms. Waly said.

Pramila Patten, UN Special Representative of the Secretary-General on Sexual Violence in Conflict drew attention to "Sexual violence [which] has been one of history’s most silenced and least condemned crimes.”

“We must remember that survivors of conflict-related sexual violence are entitled to dignity and respect,” she stressed.

Highlighting his country’s efforts, Abubakar Malami, Minister of Justice and Attorney General of Nigeria said that “The Nigerian National Action Plan for Preventing and Countering Violent Extremism notes the important role women can play as policy-makers, law enforcement officers, but also wives and mothers in preventing violent extremism and in the rehabilitation and reintegration of violent extremist offenders.”

UNODC encourages Member States to look at the ways in which policies, laws, and criminal justice procedures could be better structured to address the problems and concerns of women affected by terrorism. The Office is working to empower women’s voices in efforts to address terrorism and violent extremism, with a particular focus on promoting the role of women in counter-terrorism and criminal justice agencies. It is also supporting countries to effectively criminalize, investigate, and prosecute perpetrators of sexual and gender-based violence committed by terrorist groups.

10 years of providing assistance to victims of human trafficking

At an event marking 10 years of the  UN Voluntary Trust Fund for Victims of Trafficking in Persons (UNVTF), participants highlighted both the achievements of the Fund and the cooperation between UNODC and Member States in providing direct assistance to victims of human trafficking.

“In the COVID crisis, vulnerabilities are increasing, as women and youth find themselves particularly affected by job losses, school closures and a lack of access to social protection,” UNODC Executive Director Ghada Waly told participants. She said it was time “to step up victim-centred responses to human trafficking, including direct assistance to survivors.” Ms. Waly expressed her hope that “together, we can galvanize new support for the Trust Fund, and help more victims rebuild their lives.”

UNODC Goodwill Ambassador and Nobel Peace Prize laureate, Nadia Murad, highlighted the essential need to provide care and support for victims and called for solidarity, “to ensure that the Trust Fund can have the reach and impact envisaged by the Global Plan of Action to respond to the needs of victims for years to come to end this heinous crime.”

The newly-elected Chair of the UNVTF Board of Trustees, Dame Julie Okah-Donli – in her first official engagement highlighted the Fund’s new initiatives such as a grant programme delivering swift humanitarian aid to victims in emergent crises. “Providing needs-based assistance to victims of human trafficking is not costly. With renewed Member State commitment to the replenishment of the Fund, UNVTF can make a greater impact and fulfil the mandate it was entrusted with by the UN General Assembly.”

The Belgian Deputy Prime Minister Vincent Van Quickenborne called the support for victims of human trafficking “our duty” and highlighted that this “requires a smooth coordination on the ground, not only between public authorities, but also with grassroots organisations on the frontline.”

Also speaking at the event was Jean-Claude Brunet, Ambassador-at-Large for the fight against transnational criminal threats, the former Swedish Ambassador-at-Large for combating trafficking in persons, and two non-governmental organization (NGO) grantees – BOK Africa Concern and Project Rescue. The NGOs showcased good practices from Ghana and India respectively in providing direct assistance to survivors, with the aim of helping them rebuild their lives through the Trust Fund small grants programme.

Preventing endangered and critically endangered species from extinction is a race against time. Recognizing the need to act now, participants at “The Nature of Corruption” event discussed the importance of addressing corruption linked to wildlife, forest and fisheries crime (WLFC) as an integral element to achieving Agenda 2030 and addressing the biodiversity and climate crises.

Participants agreed on the need to build collective momentum and embed the issue of corruption linked to WLFC into the global crime prevention and criminal justice agenda. They emphasized that success was possible, and that UNODC and its partners had developed good practices that can and should be shared and replicated.

UNODC Executive Director Ghada Waly highlighted the Office’s integrated support to Member States in addressing WLFC. “As countries mobilize to recover with integrity from the COVID-19 crisis,” she said, “let’s seize the opportunity to disrupt the corrupt networks that profit from, and perpetuate, wildlife, forest and fisheries crime.” “Bringing the private sector into the strategy to combat the illegal wildlife trade has led to instrumental changes by restricting how criminals operate”, the Chair of the United for Wildlife Taskforce, Lord Hague, told participants. “No longer is this a problem for the conservation community or law enforcement to face alone.”

The need for urgent collective action was also the main message of Dr. Jane Goodall, the Founder of the Jane Goodall Institute, who said that “It is only through the collective will of governments, organizations and citizens that we can bring illegal wildlife trade to an end. For the sake of the future of our planet and animals, we must.”

To have a sustainable impact in protecting our shared planet, UNODC plays a leading role and has pioneered a series of measures to address corruption linked to WLFC. These include strengthening investigations to identify, investigate, prosecute and deter the upper echelons of the organized criminal groups involved in these crimes, through corruption risk management, and through conducting strong research and data analysis for evidence-based policy making, among others.