UNODC and the UAE Supreme Audit Institution sign a US$ 5.4 million agreement to prevent and fight corruption more effectively 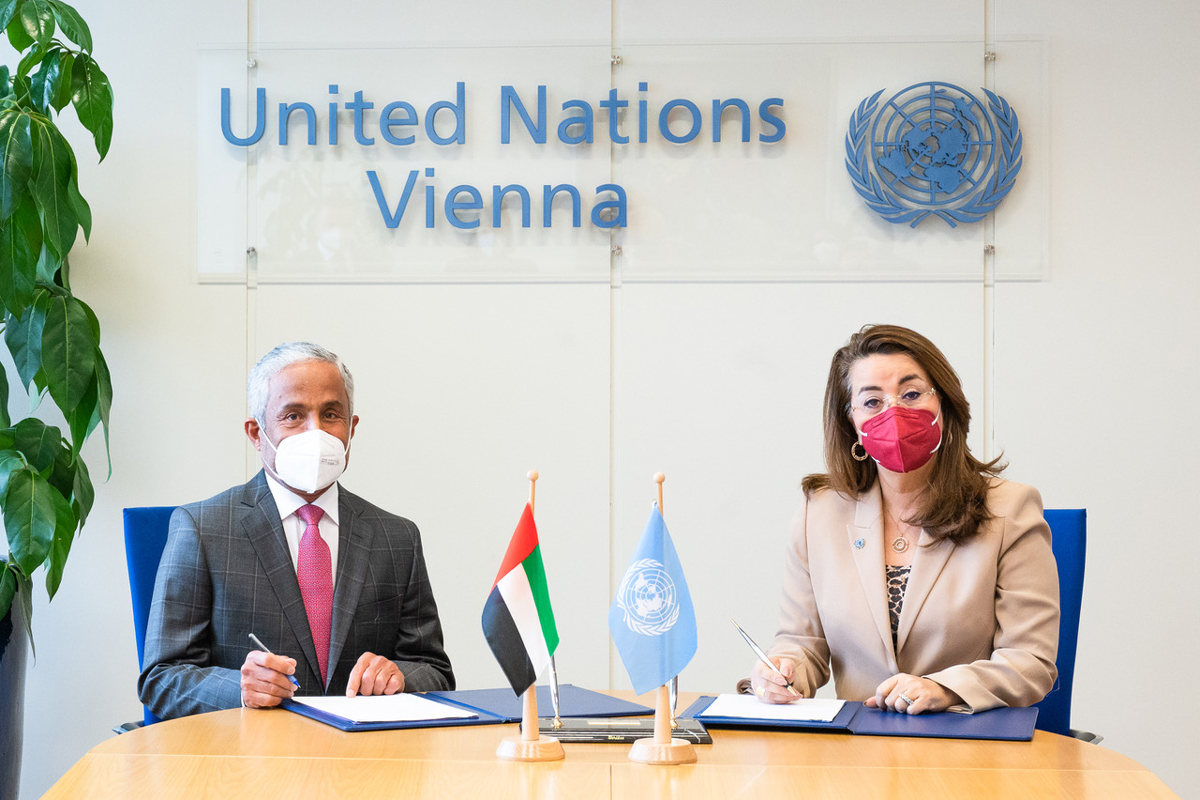 Vienna (Austria), 7 May 2021 – The Executive Director of the United Nations Office on Drugs and Crime (UNODC), Ghada Waly, and the President of the Supreme Audit Institution of the United Arab Emirates (SAI/UAE), Harib Al Amimi, signed an agreement to implement a new three-year Programme  to support the implementation of the Abu Dhabi Declaration. With a US$ 5.4 million budget, the Programme will strengthen the anti-corruption role of supreme audit institutions (SAIs) and enhance cooperation between them and anti-corruption (AC) bodies.

At its 8th session, held in December 2019, the Conference of the States Parties to the United Nations Convention against Corruption adopted a resolution entitled "Enhancing collaboration between the supreme audit institutions and anti-corruption bodies to more effectively prevent and fight corruption". The resolution is also known as the Abu Dhabi Declaration.

In July 2019, UNODC and the International Organization of Supreme Audit Institutions (INTOSAI), signed a memorandum of understanding to promote a greater engagement of SAIs in the implementation of the UN Convention against Corruption.

Ms. Waly said, “I am grateful to the United Arab Emirates for its generous contribution to the implementation of the Abu Dhabi Declaration, which reaffirms the essential role that oversight bodies, in particular the supreme audit institutions, play in combating corruption. Now more than ever, all stakeholders need to unite against corruption to guarantee the integrity of the COVID response and recovery. This year, anti-corruption action is high on the international agenda, with the UN General Assembly Special Session against Corruption taking place in June, and the Conference of the States Parties to the UN Convention against Corruption in December. UNODC will support Member States in fulfilling their commitments, and looks forward to a fruitful collaboration with the UAE and INTOSAI as part of the Abu Dhabi Declaration Programme.”

Mr. Al Amimi added, “We recognize the imperative role of the supreme audit institutions and the anti-corruption bodies in the fight against corruption. This Programme aims to support the implementation of the 'Abu Dhabi Declaration' at global and regional levels. It will strengthen the role of the supreme audit institutions in preventing and fighting corruption, it will improve dialogue, coordination and cooperation between them and the anti-corruption bodies. The Programme rests on a three-pronged professional partnership between SAI/UAE, UNODC and INTOSAI, which will be key to achieving the Programme’s results”.

Under the Programme, UNODC will develop a practical guide on enhancing cooperation between SAIs and AC bodies, it will develop and deliver training programmes for both authorities on a global scale. The deliverables will be reviewed and validated by their very beneficiaries and other renown experts.

The role of anti-corruption bodies in preventing and fighting corrupt practices is clearly recognized by the Convention. So is the need to establish accounting, auditing and oversight standards in order to promote transparency and accountability in the management of public finances. The memorandum of understanding between UNODC and INTOSAI, the Abu Dhabi Declaration of December 2019 and the Programme launched today provide a comprehensive and robust architecture to accelerate the achievement of those goals.