Uniting the world against corruption: International Anti-Corruption Day 2022 marked with events around the world 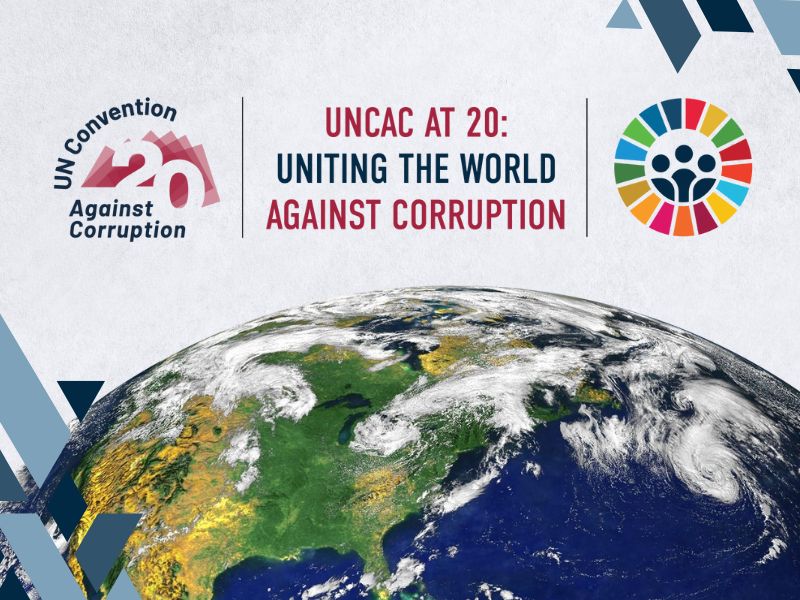 Vienna (Austria), 9 December 2022 – Over the last 20 years, the United Nations Convention Against Corruption (UNCAC) has stood to give a collective push to the world’s efforts to fight the endemic scourge of corruption, which undermines all areas of society’s development.

Today, International Anti-Corruption Day 2022, reminds us that this convention and the values it promotes are more important than ever. Today also marks the start of a campaign to mark the twentieth anniversary of UNCAC in October 2023. This period invites us to reflect on what UNCAC has meant for global efforts to tackle corruption and, crucially, to identify what gaps remain to ensure UNCAC is a truly strong mechanism for the years ahead.

International Anti-Corruption Day 2022 seeks to highlight the crucial link between anti-corruption and peace, security, and development. At its core is the notion that tackling corruption is everyone’s right and responsibility, and that only through the involvement of each and every person and institution can we overcome the negative impact of this crime.

Fittingly, the United Nations Office on Drugs and Crime (UNODC) has partnered with government officials, media, the private sector, civil society, academia, the public and youth to organize anti-corruption events around the world today.

UNODC Executive Director Ghada Waly held a series of meetings in both Washington, D.C., United States – where she was also part of the opening plenary at the 2022 International Anti-Corruption Conference (IACC) – and in Doha, Qatar, where she addressed the 2022 Anti-Corruption Excellence Awards.

At the IACC’s opening plenary on Tuesday, Ms. Waly highlighted the various areas where corruption poses threats to peace, security and development as well as three examples of where more needs to be done to counter these threats. These are: a renewed commitment to international cooperation, including through UNCAC implementation; re-establishing trust between leaders and citizens; and building greater collaboration through multisectoral anti-corruption coalitions. Ms. Waly told participants that, “in order to truly counter corruption and the myriad forms it can take, we must inspire and engage the whole of society to tackle corruption.”

Yesterday in Doha, the 2022 Anti-Corruption Excellence Awards celebrated contributories to the global fight against corruption in five fields: outstanding achievement; academic research and education; youth creativity and engagement; innovation; and safeguarding sports from corruption. The initiative is run in support of UNODC, who played a role in determining the four winners.

Ms. Waly, opening the ceremony, implored participants to scale up collaborative efforts to tackle corruption. “Corruption corrodes economies and erodes peace and security, setting back societies precisely when we can least afford it. It undermines development at a time when all sustainable development goals are suffering serious setbacks. And it enables crimes to flourish. Organized criminal networks rely on corruption to skirt laws, evade justice and launder illicit financial proceeds,” she said.

Later yesterday, Ms. Waly announced the fourth edition of the ‘Coding4Integrity’ Youth Anti-Corruption hackathon, to take place in Doha in September 2023. The hackathon will see young coders from 17 Arabic-speaking countries develop software solutions to various anti-corruption challenges posed by the organizers over a number of days, in order to harness innovation towards the fight against corruption and bribery in all their forms.

The ‘Coding4Integrity’ Youth Anti-Corruption hackathon is being organized thanks to the financial contribution of the Arab Anti-Corruption Convention and in partnership with Microsoft Qatar.